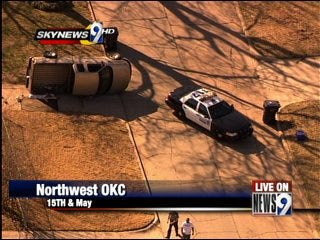 Police said two vehicles were chasing each other firing shots near Northwest 15th and May Avenue Monday afternoon.

Two people were shot and they took themselves to the hospital. Neither had life-threatening injuries.

Another vehicle, a pick-up truck, was rolled on its side in the same neighborhood. Police said they believe this vehicle flipped when it was trying to avoid the gunfire.

Investigators are still trying to connect the missing information.

No further information was available.