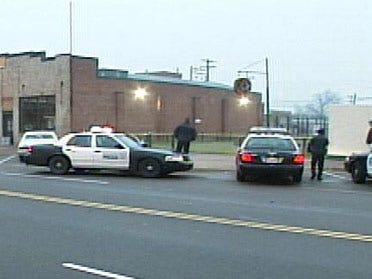 I don't remember if it was after the third or the fourth homicide today, but at some point I looked at my photojournalist, John Almendarez, and said "are we working in Oklahoma City or Los Angeles?"

It was a day full of deadly crime for this reporter.

I was still at home getting dressed when the desk called me and said "hey, we got a big one for you today."   Being the typical Mr. know-it-all, I said I already knew about the body found at a rescue mission thanks to a text I received on my phone from News9.com.

Nope.  It was bigger.  I was told there was a second body located near the first one and police were calling it a double homicide.

When we arrived we joined several of our other crews who were already on the scene gathering video and sound bites.  I looked over and saw the mangled body still leaning up against a fence.  His arm look twisted around his head and his legs looked bent out of shape.  It looked as if he was running as fast as he could into the fence and then collapsed.

I never did get a look at the second body.   One was enough for me.

About an hour later our desk called me again and notified me of another homicide not too far from that location.   An hour later we were told to go to SW 77th to check out another death - a "suspicious" one.

Four possible homicides in one day.   Two nights ago a man was shot several times near my apartment complex on NW 122nd.   Earlier in the week two people were shot and killed in Midwest City.