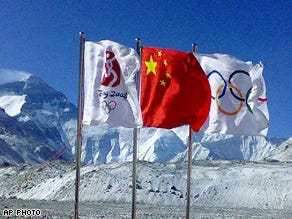 The 2008 Olympic torch relay wrapped up in the Chinese territory of Macau with a glittering show on Saturday, even as officials said weather conditions may force a delay of a torch run up Mount Everest, the world's highest peak.

Chinese mountaineers were waiting at a base camp to carry the flame up Everest, located in Nepal and the Chinese region of Tibet. However, those in the region woke to new snow on Saturday, and more fell later in the afternoon.

"The trail might get slippery with snow," said Zhang Zhigang, an official with the weather service overseeing Everest -- or Mt. Qomolangma, the peak's Tibetan name -- according to China's state-run Xinhua news agency. "If it keeps snowing, the thick cover of snow will make the climb difficult."

Beijing promised in its bidding reports seven years ago that the torch would reach Everest's 29,029-foot (8850-meter) summit. It would be the first time the Olympic flame has scaled the mountain. Nearly two years of preparation have been required for the Everest leg of the relay, according to the official 2008 torch run Web site.

The snow threatened a delay of at least three to five days.

Meanwhile, the torch run in Macau came to a spectacular finish amid casino lights and a fireworks show on Saturday. The former Portuguese colony, which came under Chinese rule in 1999, is the last stop for the torch before reaching mainland China. It was expected there Saturday night.

The run was completed in Macau without incident. Thousands of people lined the streets, waving Chinese flags as the torch passed. Security was tight, however, with some 2,300 officers present, some jogging alongside the torchbearers.

Little mention was made of the sometimes-rocky journey the torch made through Europe and the United States, where the run was hindered by protesters decrying China's human rights record and supporting the Free Tibet Movement.

Chinese media and the torch Web site showed a picture of Leong Heng Teng, a member of the Executive Council of the Macau government, lighting a cauldron at the peninsula's Fisherman's Wharf, marking the end of the torch's journey in Macau.