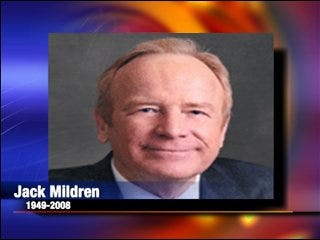 The 58-year-old had been going through treatment for cancer. Mildren was diagnosed two years ago with cancer but had continued to serve as a vice chairman for Arvest Bank and host a daily sports radio show on WKY 930-AM.

Mildren was a quarterback at the University of Oklahoma from 1969-1971 before playing for the Baltimore Colts and New England Patriots.

He was the quarterback on Oklahoma's vaunted wishbone offense in 1971, when the Sooners set an NCAA record by averaging 472.4 rushing yards. That record still stands.

The Sooners racked up 5,196 yards on 813 rushes that season, finishing an 11-1 season by defeating Auburn in the Sugar Bowl. Oklahoma's only loss came in the so-called "Game of the Century," when top-ranked Nebraska beat the No. 2 Sooners 35-31 despite four touchdowns from Mildren -- two rushing and two passing.

Mildren finished the season with 1,289 yards rushing -- the most in school history for a quarterback .