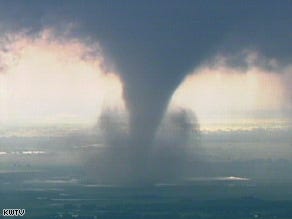 Tornadoes formed over northern Oklahoma on Saturday in the state's third day of severe weather.

First, shingles skittered off the roof, and then the roof itself peeled away like the top of a sardine can and filled the air with debris, video showed.

Manager Joe Popplewell was with his family in a storm shelter at his home a few miles away when the tornado passed overhead.

"As it was coming towards our home, it kind of lifted up, lost its organization a bit," said Popplewell's wife, Susie. "When it came down, it wasn't as big."

As the eye of the tornado drilled a path through the farm, trees were torn from the ground, their limbs launched hundreds of feet aloft.

After the storm passed, Popplewell rushed to the farm, expecting the worst.

"Fortunately, there were no injuries at all to any of the people as they were working at the farm," he said, referring to the 4,000-sow facility.

"At this point, we don't believe that, amazingly, that any animals were injured. I can't believe it," Popplewell said.

The sows were kept in crates, which served as shields against the wind, he said. The biggest challenge now is to find a safe place to hold the animals where they'll have access to food and water, according to Popplewell.

Area hospitals said they had received no immediate reports of injury as police tried to keep motorists from the affected areas.

"They're trying to block off the highway," Hennessey Police Department dispatcher Jana Butts said, referring to U.S. 81 between Hennessey and Bison.

Jerry Niles, undersheriff for the Garfield County Sheriff's Office, watched from his car as a tornado formed near him. "

I'm backing up and getting out of the way," he said. "We don't need to be near a funnel of that size."

He said that about half of the area's homes have cellars and urged residents to listen to weather radios.

The twisters touched down during the third consecutive day of severe weather in Oklahoma.