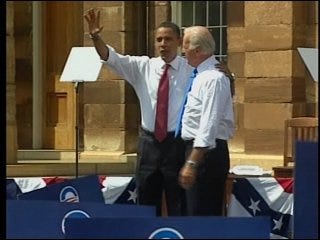 OKLAHOMA CITY - Barack Obama's decision to add Joe Biden as a running mate has strong support from some of the Democratic party's top leaders in Oklahoma.

"So let me introduce you to the next president, Vice President of the United States of America, Joe Biden," Obama announced in Illinois Saturday afternoon.

Now the party is praising Obama's choice of Biden as a running mate.

"He is so genuine. He wears his heart on his sleeve. He really cares about other people and he's gone through a lot of the struggles himself that the average American goes through," said former Oklahoma Governor David Boren.

Currently OU's president, Boren has been friends with Biden for nearly 30 years. Boren's a foreign policy advisor to the Obama campaign and supports Biden on the ticket.

"He's a person that has a very bi-partisan spirit. He's a person who works across the isle to do what he thinks is right for the country, so I don't think Obama could have made a better choice than Joe Biden," Boren said.

Governor Brad Henry also likes the choice. Henry released a statement that said Joe Biden is a great pick and he expects the Obama ticket to be even stronger now that Biden is on board.

"So far it's been very, very good. We felt like we needed somebody who had some experience and we felt like that his background, as far as being on the foreign relations committee, was a very positive thing," Holmes said.

"This may be the toughest man nominated to be president since Spiro Agnew," Mitchell said. "He can be as mean as Spiro Agnew, but he can be as charming as anybody that's ever lived, so this is a really, really good vice-presidential pick."