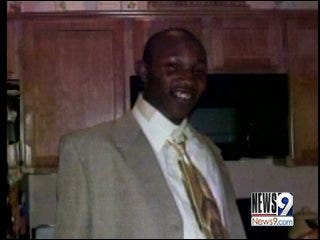 LAWTON, Okla. -- Lawton officials said calm has returned to the city after a period of threats to police officers. The threats arose after a Lawton officer fatally shot an African American man.

Police said Johnson was a convicted felon and a suspected drug supplier. Johnson's family believes the shooting was not justified and the situation should have been handled differently.

After an investigation by the Oklahoma State Bureau of Investigation the district attorney decided the officer acted properly.

"The officer, in his own mind, when he saw that he [Johnson] had something in his hand when he was coming towards him was convinced that it was a weapon," Comanche County District Attorney Robert Schulte said.

Johnson's death spawned graffiti at the shooting site, and the D.A.'s decision sparked threats against police.

"Right after the shooting we had threats on officers," Lawton Chief of Police Ronnie Smith said. "We had one house, one police officers house was shot up with his family in it. He was at work. They evidently timed it to where he would leave to go to work then they would shoot up the house."

Police then took extra precautions, doubling up on nightly patrols and sometimes riding with U.S. Marshalls.

Community and religious leaders have worked to defuse tensions. For some though, the matter is not settled.

Lawton police said they believe Johnson to have been affiliated with a local gang. Police also estimate that Lawton has an excess of 100 gang groups.

Lawton Police said they have some good leads in the attack on the officer's house and charges could come soon.