Must Be He Continues Local Turf Dominance, Three Straight 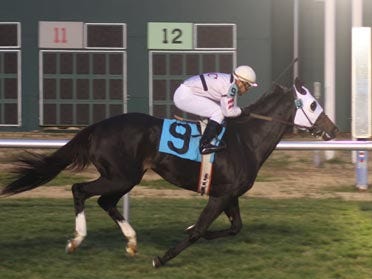 OKLAHOMA CITY - Must Be He has always fared very well in turf racing but he has really taken to the Remington Park surface this season, evidenced by his third consecutive local grass score on Sunday afternoon.

Owned by Danny Caldwell of Poteau, Okla. and trained by Tommy Page, Must Be He won Sunday's $32,750 optional allowance feature under Martin Escobar. After waiting patiently through the first half-mile of the 7-1/2 furlong event, Must Be He commenced a rally out of the final turn. Once in gear, he ran past the pace-setting Quest Venture and took control to win by 1-1/4 lengths over Regal Career who failed in a last-to-first attempt.

The third straight Remington Park turf win for Must Be He was his fifth overall in Oklahoma City and the 10th in his 55-race career. An Oklahoma-bred 6-year-old gelding by Blumin Affair from the Roo Art mare Shewhomustbeobeyed, Must Be He made another $20,382 for the win to push his overall bankroll to $172,415.

The win gives Caldwell 11 on the season to help him stay atop the owner standings. He now has a two-win lead over a pair of owners, attempting to win his first Ran Ricks Award as the top owner.

Just eight days remain in the 2008 Thoroughbred Season at Remington Park. Action resumes on Thursday, December 4 with a nine-race program scheduled for 6:30 p.m.

Must Be He Continues Local Turf Dominance, Three Straight