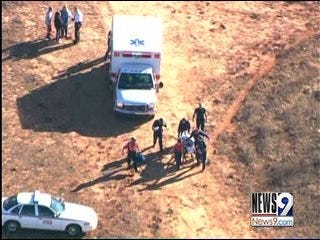 CHANDLER, Oklahoma -- Lincoln County deputies are investigating an accidental fatal shooting of a teenager by a 13-year-old.

The 13-year-old victim, Michael Contway, was shot in the head and was transported to OU Medical Center Monday night. He died on Tuesday, deputies said.

The incident happened near Post and Red Rock roads southwest of Chandler.

Sheriff's deputies are trying to determine how boys got a hold of the .22 caliber and how the shooting occurred.

Captain Mike Madden with the Lincoln County Sheriff's Office said these kind of accidents can be prevented by parents.

"School your children. Don't just say 'leave it alone,' school them. Teach them what a gun will do," Captain Madden said.