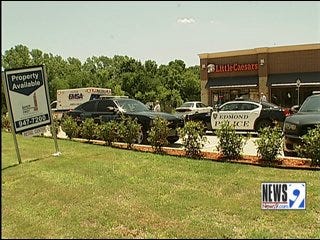 EDMOND, Oklahoma -- It happened in broad daylight and now, Edmond police are trying to find the missing pieces behind an attack at a Little Caesar's.

Police have very little to go on. A woman claims she was attacked, and briefly knocked unconscious.

The incident occurred along Edmond Road, a busy street flowing with traffic. An employee at the Little Caesar's was working during the noon hour.

"She was taking out trash and she says while she was in the back of the building doing this, she was attacked," Glynda Chu with the Edmond Police Department said.

The woman claims the man took off into the woods, and she ran for help back at the pizza joint.

"She said the whole thing happened very quickly and that she was even knocked out for a short time," Chu said.

Police immediately began their investigation, even using search dogs to scour the woods. But, in the end, they turned up nothing.

"It appears she doesn't have any life-threatening injuries, but she's going to be taken to a hospital to be checked out," Chu said.

As for her attacker, she describes him as a white male, wearing a red shirt and blue jeans.

If you saw or heard anything, Edmond police would like to hear from you. Call Crimestoppers at 359-4466.