Black Hawk Helicopters Had No Delay For Spencer Fire Response 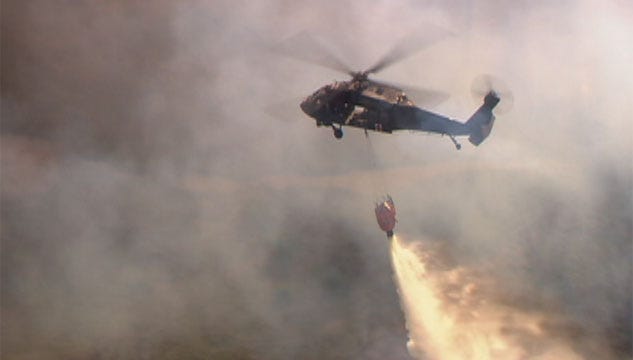 OKLAHOMA CITY -- A total of three of the four Oklahoma National Guard helicopters were called out to yesterday's rash of wild fires across the state, and some may have felt it took a while before the choppers arrived on the scene.

But both the National Guard, Oklahoma Emergency Management and the State Forestry Services division said there was no delay in getting those resources out. A total of four helicopters have been on standby since Sunday.

But there is a protocol that needs to be followed before the National Guard helicopters are deployed. First, Oklahoma Emergency Management, or OEM, needs to receive a request for assistance from local officials. Then, OEM contacts the state forestry division. They assess the fire need with incident commanders on the ground at the scene. The Forestry services division then contacts OEM if a helicopter is needed and they contact the National Guard.

Lt. Col. Max Moss with the National Guard said from the time they get the call to the time they deploy is only about 15 to 30 minutes.

Black Hawk Helicopters Had No Delay For Spencer Fire Response