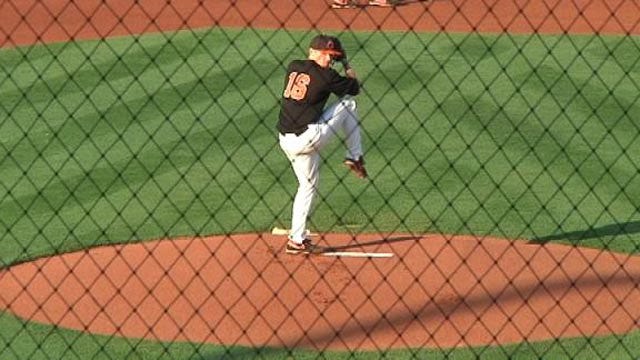 NASHVILLE, Tenn. – Things were looking food for OSU in its first game of the regional on Friday.

But then again, things can change quickly.

Oklahoma State held an early lead but quickly gave up nine straight runs in a 9-2 loss to open regional play against Troy.

The Cowboys started off solidly with Luis Uribe homering in the first at-bat of the second inning to put his team up 1-0.

Then in the third, that lead increased to two as Zach Johnson singled to right field to bring home Devin Shines.

OSU was looking solid through the first three innings, but that was the only offense the Cowboys would be able to muster that day.

The Trojans drove in one run in the fourth to start their run. They took it up a notch in the sixth inning, scoring three but still leaving three on base at the end of the inning to take a 4-2 lead.

OSU had trouble getting runners in scoring position, but meanwhile Troy did its real damage and sealed the victory in the eighth inning.

The Trojans went through several OSU pitchers on their way to a five-run inning, essentially putting the game out of reach.

Hunter Herrera had a tough day in the loss, giving up four earned runs in 5.1 innings.

OSU now moves to the bottom of the bracket and will play at 2 p.m. on Saturday. The Cowboys will face the loser of the Vanderbilt-Belmont game.