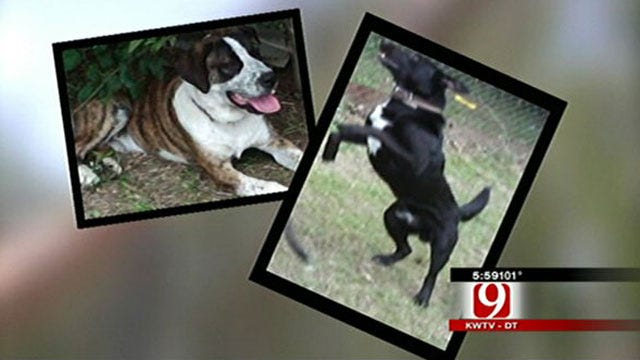 NEWSCASTLE, Oklahoma -- A Newcastle couple who lost everything in the May 24 tornado is now dealing with another loss; the loss of two beloved pets.

April Stout said the couple's three dogs rode out the tornado with them in a small storm shelter. Their house was destroyed, but they were all okay. The dogs were staying at a friend's house in Newcastle until the Stouts found a permanent place to live. The couple had just found a new home on Saturday when they received a disturbing call from a friend.

The friend told them two of their dogs got out of their temporary kennel and were picked up by animal control. April said she called Newcastle Animal Control, and an officer told her he tried to tranquilize the dogs first, but they were later put down.

April said she was told the dogs were shot and killed.

Newcastle Police Chief Gary Norman said the dogs were tranquilized but wouldn't confirm if they were shot and if so, by whom. He did say the animal control officer only carries a tranquilizer.

The incident report has not been released, but Chief Norman confirmed the male dogs -- one a black Labrador and Pit Bull mix, the other a black Labrador -- were reported running loose Saturday morning and being aggressive to customers at a local barber shop next door to where the dogs were staying.

Chief Norman said the incident is under investigation.

April said the dogs were like her children, and were not aggressive. She said she doesn't understand why the city would take such measures to put down the animals.