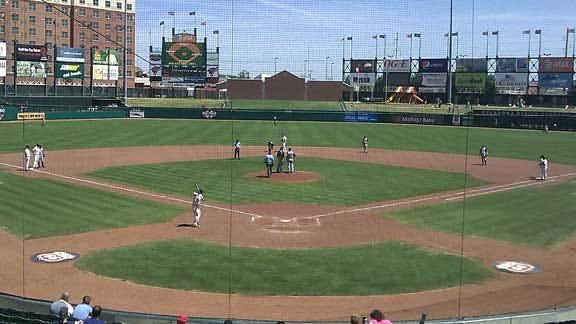 DES MOINES, Iowa – The Oklahoma City RedHawks scattered 12 hits but only scored two runs in a 3-2 loss to the Iowa Cubs Sunday.

The RedHawks (40-55) got on the board quickly, when three consecutive singles resulted in a run in the top of the first inning. But from that point forward, they could not seem to get a key hit when they needed it.

OKC put runners in scoring position in each of the second, third and fifth innings, but failed to plate any of them. The Cubs (44-51) finally took advantage in the sixth, when Chris Robinson launched a three-run homer that provided all of Iowa's offense.

J.R. Towles homered in the eighth inning for OKC to cut the lead in half, and the RedHawks had another chance in the ninth. With a runner at second, J.B. Shuck singled to center field. But he hit the ball too sharply, forcing the run to stop at third.

That put runners on first and third with one out, meaning OKC just needed a fly ball to tie the game. Instead, Robinson Cancel hit a line drive to center that was caught, and Koby Clemens struck out to end the game.

The outcome ruined a strong start by Lucas Harrell, who held Iowa scoreless through five innings of work. Reliever Fernando Abad entered in the sixth and allowed Robinson's in his only inning of work, which resulted in a loss.

The Cubs' starter only lasted 2.1 innings, but Chris Rusin entered in the fifth and pitched four full innings while giving up just one run on four hits to earn his first win of the season. Justin Berg closed the door in the ninth for his third save despite allowing a hit and a walk.

Since beginning the second half of the season with a win, the RedHawks have had trouble generating any offense. They now have lost three consecutive games and scored just five total runs in those three games.

Sunday's contest marked the end of the series against the Cubs, but OKC will remain on the road and begin a four-game series with the Albuquerque Isotopes at 8:05 p.m. Monday.