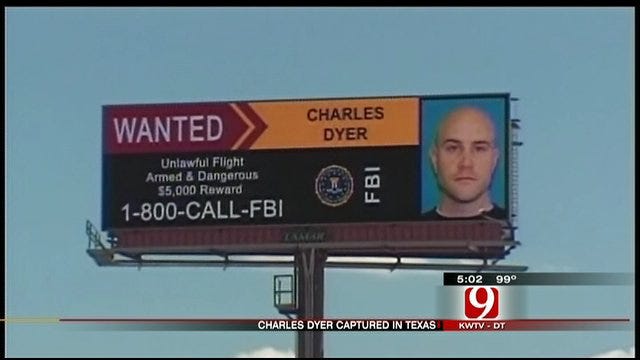 Someone spotted a man matching his description walking in a neighborhood in Pecan Grove, Texas, not far from the area which search crews scoured a few days before..

"He looked suspicious to that citizen in that his clothes were dirty," said Clay Simmonds of the FBI. "He looked like he had been living outside."

The FBI said that, at first, Charles Dyer gave the deputy a fake name. Only later did Dyer admit he was the ex-marine featured on billboards nationwide.

The FBI began searching for Dyer when he did not show up in court on a felony child rape charge.

"He had a backpack, his clothes were dirty and muddy and he was carrying a water jug. He looked kind of out of place for where he was," said Deputy Jeremy Good of the Fort Bend County Sheriff's Office.

Goodrich said Dyer stayed by the river without food or water for a week before a Sonic craving forced him to venture out.

"Just think about if you were on the run, you wouldn't want to be out too long, afraid someone might recognize you," Goodrich said.

The deputy said he picked up Dyer walking along the road carrying a drink from Sonic.

"We let him drink some while we were there," Goodrich said.

The sheriff's office credited the tipster who spotted Dyer for help in making the arrest. Deputies said Dyer was wearing a hat which made it difficult to immediately recognize him as the wanted fugitive.