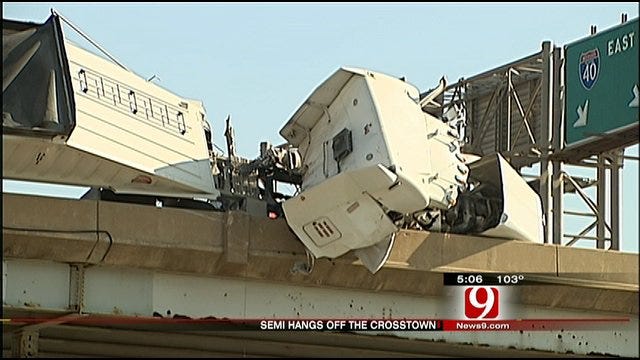 OKLAHOMA CITY -- A firefighter is being hailed a hero after saving a truck driver from a dangerous situation.

A Friday morning accident on I-40 caused a semi truck to dangle over the side of a bridge above the Bricktown Entertainment District.

Earlier Friday, the area was full of emergency crews desperately working to prevent the truck from landing during the height of the morning rush hour.

"The tractor and the trailer [were] hanging on by the skin of its teeth," Capt. Chris West, Oklahoma Highway Patrol Spokesperson said.

The scene was a scary sight for those traveling the Crosstown Friday. Initial OHP reports state an SUV- cut off the semi in rush hour traffic, causing the driver to swerve and almost careening off the ledge.

"He was hanging from his rear axle," Cpl. John Craig, Oklahoma City Firefighter said. "[It] was the only thing keeping him from coming off the side."

Craig was the man charged with the task of saving the driver.

"Danger was definitely a part of it," Craig said. "Being out on the side of a semi hanging over a bridge is definitely … it's not really where you want to be."

The dangerous rescue required Craig to be lowered onto the cab of the truck, break out a window and pull the driver to safety.

"For me, this is definitely a first," Craig said.

Craig says he's not a hero, he was just doing his job, and he's just happy he was able to rescue the driver.

"He's very lucky, very lucky," Craig said, referring to the truck driver. "If I were him, I'd go buy a lottery ticket."

OHP says up to six vehicles were involved in the accident. All of the people involved are expected to be OK.

The fire department says debris from the accident caused a small grass fire under the interstate bridge, but the fire was quickly extinguished.