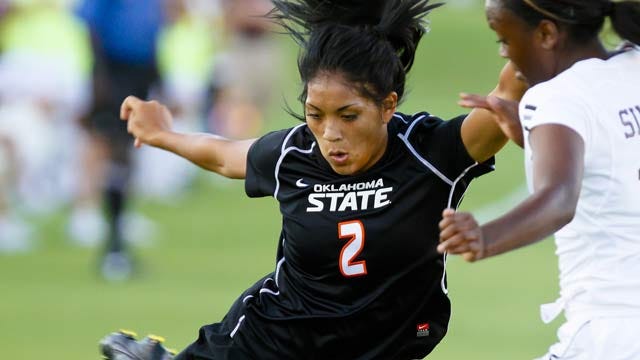 The win gave the No. 6 ranked and undefeated Cowgirls its fourth straight victory of the season.

"Arkansas played hard and did not make it easy; they were physical, athletic and well-organized," said OSU head coach Colin Carmichael, who is now just two wins shy of 100 for his career. "Our kids, coming off a tough game Friday (vs. Oklahoma) and maybe having an emotional letdown, handled it well and played great."

Oklahoma State scored first win the 33rd minute when Krista Lopez passed to Megan Marchesano who returned the ball back to Lopes for a six-yard shot that found the back of the net. The goal was the first of the season for Lopez and the 20th of her career.

Then with just 10 seconds left before halftime, Taylor Mathews rocketed a free kick from 25-yards out that deflected off the Razorbacks' defensive wall and past UA goalie Emily Lillard for OSU's second score of the game.

In the second half, OSU added two more goals to pull away for the victory. In the 80th minute, Marchesano scored her first goal of the season off a throw-in by Sarah Brown, and with just over two minutes remaining in the match, Kendra Boydstun delivered a goal off George Christie's first-career assist.

"We're getting contributions from everybody, which is great. We played everyone on our roster we brought who is healthy. The exciting thing for us is we haven't had our whole team, our whole starting 11, together yet," said Carmichael. "We're ready for that and excited to get the whole group on the field. But the other kids are stepping up and getting the job done, which is really exciting for us moving forward."

The shutout is their third straight in four games. Rosa Medina stepped in at goalie for the Cowgirls in place of the injured AD Franch.

Medina recorded five saves on 11 Arkansas shots to pick up the shutout.

"Rosa was great, and that's why we recruited her – she's very good," Carmichael said. "It's a long season, and you never know when you're gonna get your opportunity. Rosa took it and did a great job. It'll help her confidence and also helps her coaches and teammates know that if AD (Franch) can't go, Rosa is ready to step up."

OSU returns to action Tuesday against Oral Roberts at 7 p.m. in Stillwater.