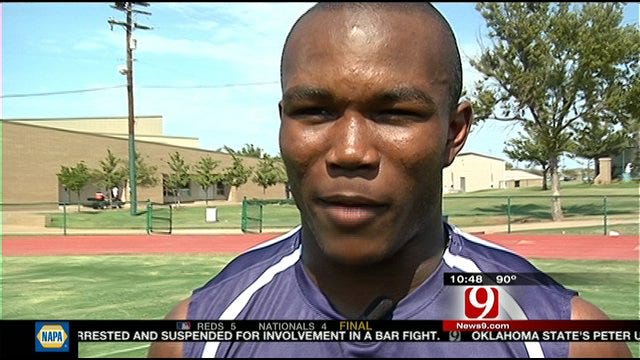 OKLAHOMA CITY – The approaching high school football season will feature some of the most anticipated running backs in recent memory.

During the Blitz Sunday, five of those running backs – Anadarko's Sheldon Wilson, Jenks' Alex Ross, Southmoore's Andrew Long, Norman's Donovan Roberts and Heritage Hall's Barry J. Sanders – gave us their thoughts on their own games as well as each others'.

Wilson was the breakout star of the year, leading the state with 2,798 rushing yards and a ridiculous 49 touchdowns. While he may not be a household name yet, he is being pursued by several Division I schools.

Roberts led a surprisingly successful Norman team to the state playoffs with 2,002 yards and led Class 6A with 32 touchdowns. He already has committed to Arkansas.

Ross finished less than 400 yards behind Roberts on almost a third as many carries. He managed to rush for more than 1,600 yards with only 125 carries as part of a time share, but he will take over the Jenks backfield completely this year. He already has committed to Oklahoma.

Long suffered an ankle sprain that sidelined him late in the season, but he managed to rush for almost 1,500 yards and 18 touchdowns.

Sanders is the biggest name of the group, but also missed much of last season with an injury and actually had the fewest yards of this five-player group. He still managed to rush for more than 1,000 yards and 15 touchdowns on only 96 carries.