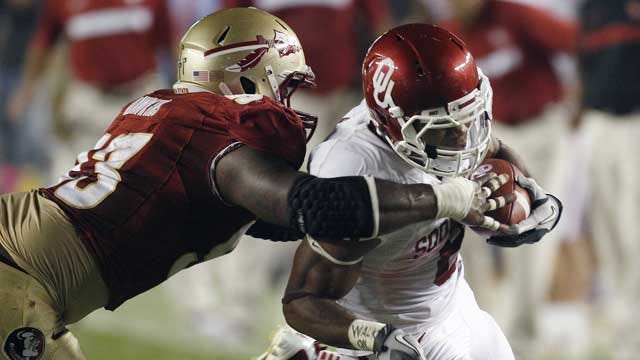 TALLAHASSEE, Fla. – Wide receiver Kenny Stills did not get to play in the Sooners' first game of the season because he was serving a suspension. When he got his first shot at the spotlight Saturday, he made the most of it.

With the score tied at 13 and seven minutes left in the game, Stills leapt high in the air and ripped the ball out of a defender's hands for a 37-yard touchdown. That turned out to be the game-winning score in a 23-13 victory over Florida State.

Stills finished with a career-high 125 yards, and his big play came when the Sooners needed it most. Their offense had stalled since a promising drive to start the game, and Florida State had taken all the momentum minutes earlier.

On the previous drive, FSU backup quarterback Clint Trickett completed a 56-yard touchdown pass on third-and-28 that tied the score. Trickett played through the end of the game after starter EJ Manuel suffered a shoulder injury in the third quarter and did not return.

The Seminoles had another chance to tie the game after Stills' touchdown, but a pass by Trickett was deflected at the line of scrimmage and OU safety Javon Harris made a diving interception – his second of the game – to give the ball back to OU.

With five minutes remaining, the Sooners ran the ball on every play of the ensuing drive and never snapped it with more than two seconds left on the play clock. They ran more than three minutes off the clock with only eight plays and forced Florida State to use all of its timeouts.

Jimmy Stevens completed the drive with a low but successful field goal to make it a two-possession game, all but sealing the outcome. The defense made it official by forcing a four-and-out when Florida State took over.

The defenses were the story of the night; what was expected to be a shootout between two high-powered offenses turned into a defensive struggle dependent on field position.

The Sooners allowed just 27 rushing yards all night and kept Florida State's receivers from getting open downfield. They had trouble containing the athletic Manuel at times, but for the most part held the Seminoles in check.

They suffered only one major breakdown, when Harris overran a deep pass that allowed the 56-yard touchdown to tie the game. But Harris redeemed himself with his late interception.

The Florida State defense, one year after allowing 47 points to the same Sooner team, was vastly improved. OU began the game with a 15-play, 80-yard touchdown drive, but after that neither team could string long drives together.

In fact, there were 44 minutes of playing time between the game's first two touchdowns. In the time between, the special teams units became the keys to the game.

Florida State kicker Dustin Hopkins hit two field goals longer than 45 yards for the Seminoles' first two scores, and the punters for both teams kept the opposition pinned deep in its own end zone. Both punted four times, both averaged more than 46 yards per punt, and they combined to drop five punts inside the 20-yard line.

While the two teams played evenly for most of the night, the Sooners made the necessary big plays when it mattered. The victory should solidify Oklahoma's position as the No. 1 team in the nation, and the Sooners will begin conference play at 7 p.m. next Saturday at home against Missouri.