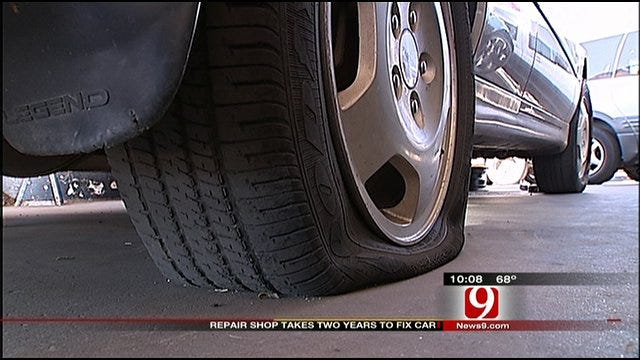 OKLAHOMA CITY -- To Misty Hopkins, her 1995 Acura Legend is something special. The problem is she hasn't driven it in more than two years. She took it to Deville Car Care in July, 2009 to get the engine replaced, paying the owner more than $1200 up front.

Hopkins thought it would take no more than a few months. Now she says the owner has come up several reasons for the delay in receiving the engine, including the spring 2011 Japan tsunami. And now, with the car parked outside the shop, Hopkins said there are new problems.

"I find out the transmission has gone out, my passenger door wouldn't open anymore," Hopkins said. "The struts on the ride side were out. It's sitting out in the sun. The paint is chipping. Someone backed into it and scraped the bumper."

Now paying for a weekly rental car, Hopkins just wants her car back.

"Every week there's an excuse and every week it's, ‘come back next week and I'll have it ready next week,'" Hopkins said.

With another week gone by, Hopkins contacted Consumer Watch.

"Hopefully I can get my car fixed," Hopkins said.

I went to Deville Car Care in Bethany in hopes of making that happen. While waiting for the owner to show, I met another unhappy customer.

John Martin drove all the way from Dallas to check on his daughter's car. Martin said he paid the owner $3000 more than a year ago to replace the engine, and he said he hasn't seen the car since.

I asked the owner, Kenny Van, what the hold-up is on Hopkins's ride.

"I just need to get the car ready for her," Van said. "That's why I rent the car because the motor, it's hard to find the motor for that."

He's referring to paying for her rental car. But Hopkins said those payments stopped a few weeks ago, and why the delay in starting the work?

"Finally when she could get money, she came to me to talk to me about three months ago," Van said.

Van said Hopkins just paid him three months ago, but she showed us a copy of a check she made out to him in 2009.

But Van did promise me her car would be ready by the end of this week. We'll check back. And while we were there, John Martin and the owner were working out plans for him to pick up his finished car.

Before hiring a mechanic, the Better Business Bureau said first get references, and verify if the mechanic is certified to do the work.

Just because you've hired them to fix something before, doesn't mean they're an expert in all car repairs.

And check with reputable groups like the BBB to see if they're in good-standing.