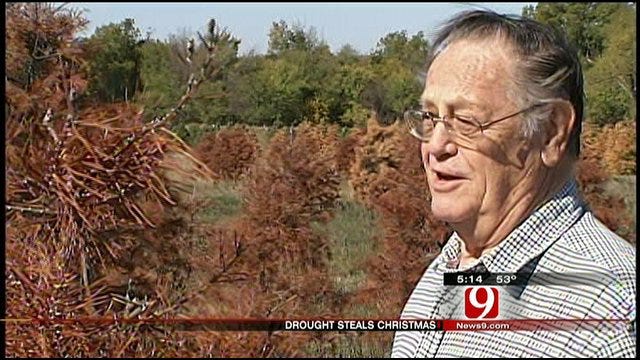 PURCELL, Oklahoma -- Drought hit Oklahoma hard this year.  The Christmas Tree Farm in Purcell is but one of many farms that was dealt a particularly severe blow. Owner Bill Raisey said the damage is the worst he has seen in 20 years of growing the trees.

"At one time we had as many as 11,000 tree growing," said Raisey. "Everything you've been working for is down the tube."

Raisey lost more than a thousand Christmas trees this year alone. He knew the dry summer would claim some of the trees. "The trees were dying and I didn't know where I'd end up," he explained.

Thursday, Raisey stood on his farm and surveyed the damage. He said, "I look out now and I see where I am."

The damage was so bad that Raisey decided it was time to close up shop for good. He said at 83-years-old it was the right time to retire. He won't be selling any trees this year even though some are alive and well.

"They wouldn't get the selection that they want, I don't think," said Raisey. "They'll be disappointed."

He has already had calls about opening day, but this year, for the first time in two decades, there won't be an opening day.

"To get a tree up this tall is five years and look at that, no good," he said as he broke off the top of a dead tree.

Years of work was destroyed, in what Raisey said was only a few weeks.

The decision to close the farm was bittersweet. His family had many memories over the years. The man of few words summed it up with, "It was nice."

Although Raisey's farm is closing down he wanted to make sure anyone who wanted a tree knew where to go. He said Christmas tree hunters should go to www.okchristmastrees.com for a list of locations.