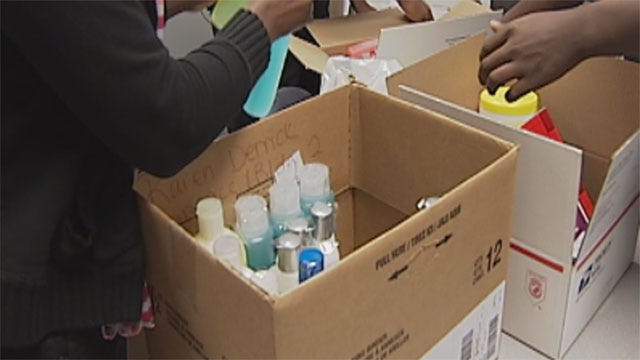 For the first time ever women are taking on a new role in the military and one of Oklahoma's own is leading the way. She's one of the only 34 members of a unique and controversial elite commando unit.

Women in the elite unit are working next to Army Special Forces and the Rangers. Their mission: to do what the men cannot -- deal directly with the Afghan women and children. A group of students in Oklahoma have found a way to make that job a bit easier.

"I think being part of this historical moment for all females, it's almost words can't explain it, because it's surreal," said the Oklahoma City member of the first ever female engagement team. News 9 can't reveal her name because of the dangerous nature of the mission.

Just last month, one of the women on the team was killed. These women, heavily armed, go into compounds after they are secured by assault teams.

11/11/2011 Related Story: Checotah Soldier To Be Buried In Arkansas Friday

"Our primary mission is to go out and provide aid to the females, win the hearts and minds of the culture by working with the females, the population that can't be reached that the males can't speak to," the soldier said.

And that's where a group of Francis Tuttle DECA students comes in. They are collecting travel size hygiene products and sending them directly to the Oklahoma soldier.

"They're giving it out to the citizens there to kind of build repore with them," said Corey Wilson of Francis Tuttle's DECA club.

The students feel a kinship with the Oklahoma soldier who is also a former Francis Tuttle student, and have found in a class project way to make a difference thousands of miles away.

"It's just an opportunity for me to actually impact someone else who has no idea who I am," Wilson said.

The project is called Operation Blue Diamond and there are collection boxes all across town. The group is also collecting money to mail the products to Afghanistan.

For more information about drop off locations and how you can donate, go to the Operation Blue Diamond Facebook page.