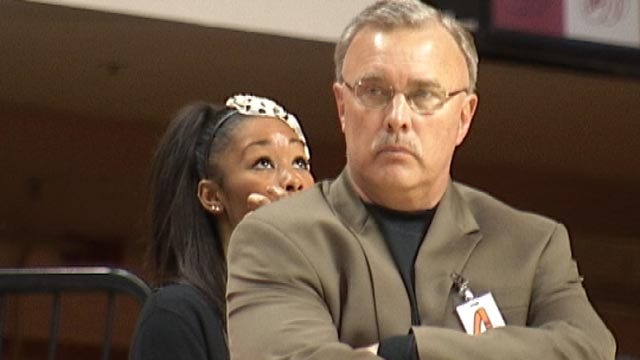 The university made the announcement Friday and his appointment is pending final approval by the Oklahoma State University/A&M Board of Regents.

Littell was named the interim coach of the team after the tragic death of head coach Kurt Budke and assistant Amanda Serna who were two of four people killed in a plane crash on Nov. 17.

"Kurt Budke laid the foundation for this program," Littell said. "It is our goal to continue his vision for Oklahoma State women's basketball. We know that many challenges await us, but we are excited about the future of our program."

"Jim has been a great leader for our program," Holder said. "The circumstances in which he has had to navigate are obviously very trying but he has been a rock over the past month for our women's team and for the community."

Littell has spent the past six years as the program's associate head coach. During his time in Stillwater, Littell has been instrumental in helping OSU reach five consecutive postseasons, including three trips to the NCAA Tournament.

He was one of the most successful head coaches in the nation during his 14 seasons at Seward County Community College in Kansas.

A 2009 inductee into the National Junior College Athletic Association Hall of Fame, Littell compiled an eye-popping set of numbers at his former post as the Lady Saints won 87 percent of their games, tallying a 418-61 ledger and producing nine Jayhawk West Conference titles under his guidance. Overall, Littell owns a 628-117 mark as a head coach.

A nine-time conference coach of the year, Littell was named the WBCA National Coach of the Year in 2001 and was selected as the top coach in the region on four occasions, earning the distinction in 1999, 2002, 2004 and 2005.

His 2002 squad produced three All-Americans, a perfect 38-0 mark and the school's first-ever national championship in any sport. He was named the NJCAA National Tournament Coach of the Year that same season. The 2001-02 season capped a three-year run by the Lady Saints that produced 104 wins against just two losses.

Under his watch, the Lady Saints recorded seven 30-win seasons. After finishing with a 14-16 record during his first season, Littell's squads never produced less than 25 wins in a season and averaged nearly 32 wins per year against less than four losses over the course of his final 13 seasons.

The most impressive number of all may have come in the form of Seward County's home record in his 14 seasons. From 1995-2004, the Lady Saints did not lose a home game, posting a 135-game winning streak inside the SCCC Activities Center to set the NJCAA national record. During the course of his final 13 seasons, Littell's squads won 99 percent of their home contests, producing an astounding record of 189-2.

All told, his squad's produced 11 All-Americans and five Region VI MostValuable Players. Nine times, one of Littell's players was tabbed as the Jayhawk West Conference Most Valuable Player, while four players from Seward County earned the league's freshman of the year honor under his direction.

Prior to his run at Seward County, Littell spent one season at Garden Plains High School, posting a 21-3 mark. As head coach at Friends University from 1983-88, he produced a 95-39 record and a pair of conference championships. He also served as the assistant men's coach at Cameron (Okla.) University from 1988-89.

Littell began his coaching career at Oxford High School in 1978 where he produced a 94-14 mark and a Kansas Class 2A state championship in 1981.