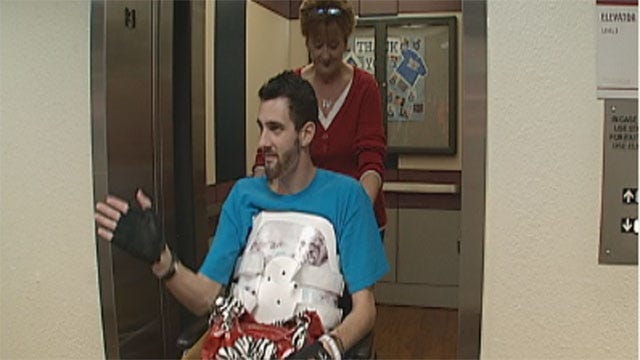 A Good Samaritan stopped to help a stranger change a tire and ended up losing his leg. Police say an inattentive driver hit Tyler Ryan, changing his life forever.

On Monday, Ryan took his the first steps since the accident on November 9. He stopped to help a stranger change a tire and was getting the spare out of the trunk.

"That was kind of like the last thing I remember until I went back to the middle of the street, I was laying in the street," Ryan told News 9 on Monday.

Morshed Khandaker was the man he stopped to help.

"One of those (calls) you don't want to get," said Shirley Coleman, Ryan's mother.

Doctors would later tell Ryan's mother they never thought he would live.

"He lost a lot of blood at the scene of the accident," Coleman said.

Ryan had a broken back, and two crushed legs, one that had to be amputated.

"The second day he was in serious pain, but he was saying ‘how am I doing?'" Khandaker said.

It would take nine surgeries, but Ryan is making huge strides toward recovery. His bones may have been broken, but not his spirit. Ryan said if he could do it all over again, and he would still stop to help.

But looking back is painful.

"Just all the people who have been there for me, that's the part that shocks me the most," he said, trying to hold back tears.

And that's why he said he has to keep looking forward.

"It's a new life, I'll figure something out," he said.

And keep looking forward is what is printed on bracelets that are being sold as a fundraiser. Ryan's story is spreading across the country. Tim Tebow wears one whenever he is not playing football.

Ryan does not have health insurance. For more information on how you can help, click on the following links: