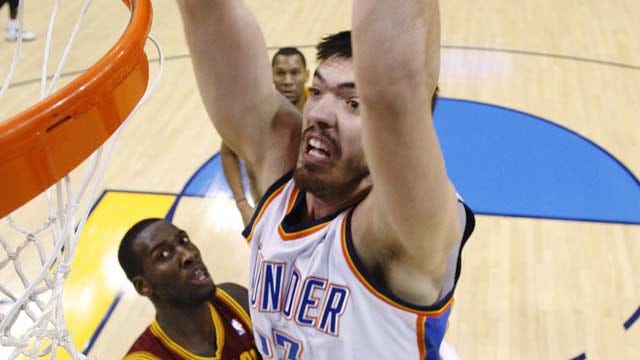 The Oklahoma City Thunder traded center Byron Mullens to the Charlotte Bobcats Monday in exchange for a 2013 second round draft pick.

Mullens has been with the Thunder for two seasons after being acquired in 2009. He participated in 26 games for OKC and averaged 1.5 points and 1.3 rebounds over those two seasons.

"While we believe that Byron will be a productive player in this league, it became apparent that in the near future it would be difficult for him to continue his development and have the opportunity to make a significant impact on our club because of the current make-up of our roster," said OKC Executive Vice President and General Manager Sam Presti. "This trade allows us the opportunity to create both future financial and roster flexibility while providing us with an additional draft pick in 2013."

The trade frees up one roster spot for OKC who now has 14 players under contract.

The Thunder returns to action Dec. 20 against Dallas in the team's second and final preseason game of the year.