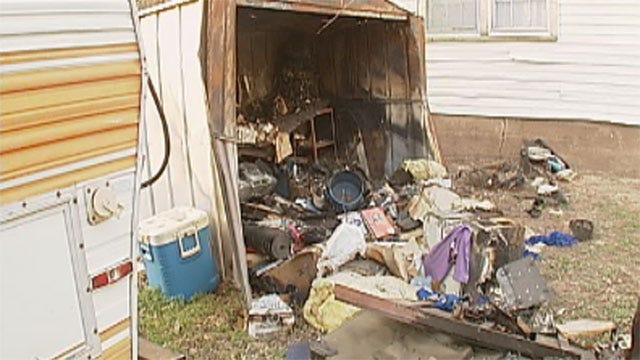 A 13-year-old Guthrie girl is behind bars for allegedly setting her grandmother's house on fire. In December, the teen allegedly set her neighbor's shed on fire, but nobody knew who was responsible.

Last week, when her grandmother's kitchen went up in flames, police arrested the teen for arson.

"It made me real nervous because the propane tank right there. They were afraid it was going to blow, plus my grandmother is elderly and I was worried about getting her out of the house," Brandon Mendinghall said.

Mendinghall and his 88-year-old grandmother got out safely. Monday, firefighters came back to the neighboring house when Michael Anderson called for help.

"She is a real nice girl. Nice and sweet but you just never know," Anderson said.

News 9 asked what motivated the 13-year-old accused of arson, but her brother refused to comment.

"I would say she has a problem with fire. I was concerned if we let her stay, she would do it again," said Mark Bruning of Guthrie Police.

Because the girl is a juvenile, police aren't releasing many details about the case, but they are saying they want to get the girl help.