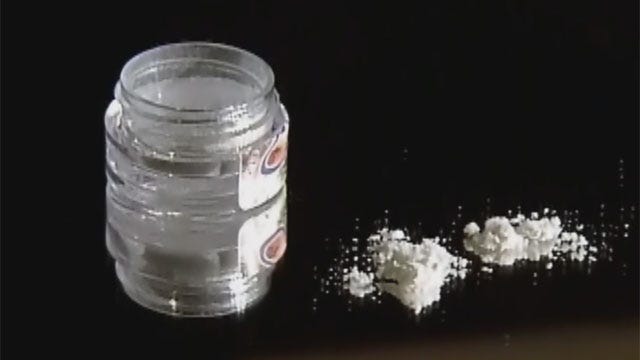 Over the past week, several people have been have caught allegedly eating human flesh and reports in at least two of those cases are now suggesting that a synthetic drug called "bath salts" could be to blame.

The drugs aren't real bath salts, instead that's the name given to the synthetic drug that can cause hallucinations and violent behavior.

In Miami last Saturday a man was shot and killed by police after eating the face off of a homeless person.  In Maryland, a man admits to dismembering his roommate and then eating his heart and brain.  Then Monday, another man was arrested for allegedly killing man with an ice pick, then eating part of the corpse.

They're all cases in the past week that have sparked talk on social media about a "Zombie Apocalypse".  But among medical experts and police the conversation is about bath salts.

"I'm thinking about it. It makes sense that people might exhibit this type of behavior," said Scott Schaeffer, RPh, DABAT, the Director of the Oklahoma Poison Control Center.

Detectives in Miami say Rudy Eugene may have been high on the synthetic stimulant. That's not surprising according to people who have actually tried the drugs.

"It was like I was possessed and I kept trying to stop whatever was in me from continuing further and I felt like I was going to bust loose and actually hurt somebody," explained Freddy Sharp.

Schaeffer says "bath salts" is just one of the names used to describe an ever-rotating series of synthetic drugs. Sold at convenience stores and over the internet, Schaeffer says his experience is Oklahomans are using the drug.

"When we receive calls like this, it's because the person themselves or a friend is overdosing or having a very severe hallucinations or exhibiting very violent behavior." Schaeffer said.

Still, Schaeffer says use in Oklahoma hasn't reached epidemic proportions but worries it could be just a matter of time. Schaeffer says the use of bath salts can cause seizures, very rapid heart rate, possible stroke and sometimes death.

After the Miami attack, the U.S. Senate recently voted 96-1 to ban the chemicals that are used to make the drug.