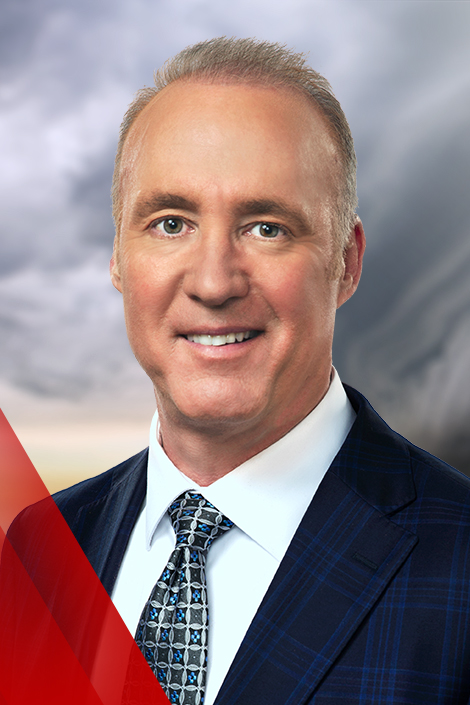 David Payne is a National Academy of Television Arts and Sciences Emmy Award winning meteorologist with a total of 8 Emmy wins and 16 nominations. The Associated Press and the Oklahoma Association of Broadcasters have recognized David for his severe weather coverage, including tracking tornadoes, many times. He was awarded "The Weathercast of the Year" for 2011 and 2013 by the Oklahoma Association of Broadcasters.

A fourth generation Oklahoman and native of Guthrie and Edmond, David's Oklahoma roots run deep. His family owns land acquired during the Oklahoma Land Run of 1889. A graduate of the University of Oklahoma, David Payne enjoys speaking to schools and organizations about weather as part of David Payne's Wild Weather Camp. This interactive and exciting show teaches weather safety to kids. Being a father himself, children's weather safety is very important to David.

During the devastating tornadoes of May 3rd, 1999, viewers around the world glimpsed heart-stopping images of David reporting live in front of that mammoth tornado. Then Governor Frank Keating recognized David for his severe weather coverage and helping to protect Oklahomans.

David's coverage of the May 8th, 2003, Moore tornado earned him an Emmy Award along with two Emmy nominations. This storm, in a freakish sequence, was the second to hit the Moore community within five years and followed roughly the same path as the 1999 storm.

David was selected by the National Association of Broadcasters in 2003 to speak at their conference on Serving Communities in Crisis, held at the Reagan Center in Washington D.C. He shared his expertise on storm tracking and Oklahoma severe weather coverage. David is routinely sought out as an expert on weather by national television programs, magazines and newspapers. He's been seen numerous times on NBC, CNN, FOX, The Weather Channel and The Discovery Channel…just to name a few.

David holds the seal of the National Weather Association and the American Meteorological Society.