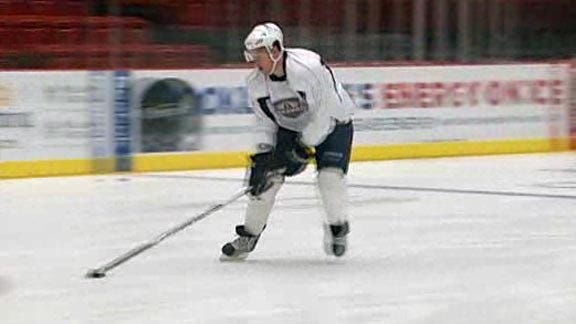 The Oklahoma City Barons dropped a 2-1 decision to the Charlotte Checkers Thursday evening at the Cox Convention Center. The Barons (20-18-2-4) allowed the game-winning goal with less than 30 seconds remaining in the game as the Checkers moved to 27-14-2-3 on the year.

The Checkers opened the scoring at 6:45 of the first period as Jeremy Welsh got a shot through that went underneath a sprawling Olivier Roy. Welsh's goal came on the power play and started with a point shot by Chris Terry and a redirect by Tim Wallace to give Charlotte at 1-0 lead.

The Barons got some quality scoring chances in the period. Jonathan Cheechoo sent a shot just wide of the goal and then Justin Peters made a left pad save to keep the Barons off the board.

Roy came up with a juggling save on Justin Shugg to keep the lead at one before Nathan Deck scored his first career AHL goal to tie the game at 14:49. Deck went top shelf on Peters with a centering pass from Josh Green.

Wallace had a breakaway with less than a minute remaining in the period but was stopped by Roy as the score was even 1-1 at the end of one. Charlotte led in shots on goal, 12-9, at the first intermission.

Neither team scored in the second period as each team doubled its shots on goal total with Charlotte leading 24-18 at the intermission.

Roy made another spectacular save late in the period with a reaching glove save on Shugg while the Checkers were on the power play.

Brett Clark had a great defensive play to keep Charlotte off the board in the third period as he broke up a partial breakaway by Sean Dolan.

After the Barons pressured Peters during the period, a late period power play gave Charlotte the chance it needed. Welsh centered a pass for Bobby Raymond who put it home a power play goal at 19:39 to give the Checkers the 2-1 win.

Oklahoma City pulled to within five in the shots on goal department with Charlotte leading 29-24 for the game.

The Barons and Checkers faceoff again Friday night at 7 p.m. CT at the Cox Convention Center.