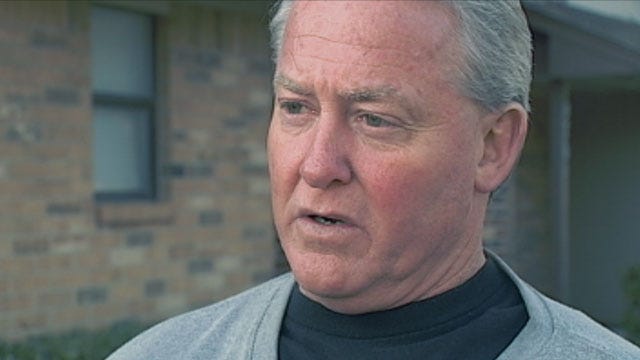 OKLAHOMA CITY -- David Rogers says he's no hero. He calls himself a "C-average man" who was just in the right place at the right time. He has lived in Oklahoma City all his life but has never witnessed anything like Friday's helicopter crash. He lays carpet by profession and was on his way to pick up breakfast for himself and his wife at Daylight Donuts when he saw a flash.

That flash of light was an Eagle Med helicopter exploding after it hit the ground after 5:30 a.m.  Friday north of Britton Road and Rockwell Avenue.

"It seemed like I was meant to be there, I mean I see something crossing my path, then I see smoke crossing my path as a turned," said Rogers. "Then I see these ladies and they're the heroes standing there in aircraft fuel without any regard for their own safety trying to put this man out."

Rogers say nurses from St. Ann's Nursing home were trying to put flames out on chopper paramedic Billy Wynn. So he dragged Wynn out of a pool of jet fuel.

"And then he asked me to get his flight suit off and with his skin already coming off," said Rogers. "You know, on my hand, and stuff, he was hot to the touch, he was too hot."

Not too long after he, Wynn and the nurses moved, a second explosion occurred. Rogers says it was about 20 degrees outside, so he stayed close to Wynn.

"I held his hand and told him to hang in there, they're own their way," said Rogers. "And about the time I said God please, they showed up."

The others in the chopper, pilot Mark Montgomery and nurse Chris Denning, did not survive.

"I hope the man pulls through," said Rogers. "I hope that for his family, for all the families of all these people, you know, that they can have peace."

Rogers says everything happened so fast yesterday that he didn't even get a chance to get the nurses' names, but says he would like a chance to give them a hug and tell them they're the real heroes.