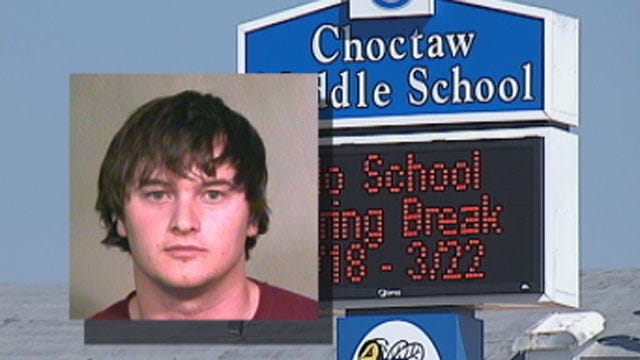 David Griggs served as a substitute teacher and coach at Choctaw Middle School for just a few weeks. Investigators say that's when he began exchanging explicit text messages and photographs with a 14 and 15 year old.

Griggs is accused of first having inappropriate conversations on Facebook. Court records reveal Griggs discussed "cuddling" with the minor and apparently knew "he would get in trouble" because he asked the young victims not to tell.

Griggs allegedly bribed a young girl with tobacco products to keep her quiet about the inappropriate photos. The victim reported to investigators that it gave her "a creepy feeling."

Griggs is also accused of texting nude photos to a teenager saying, "everyone likes sex, that if you don't your weird."

Choctaw Police and the Oklahoma County Sheriff Office worked together on the investigation.

"Griggs convinced her (minor female) to send a picture of herself in very risqué clothing and pose. He basically took advantage of this underage girl," OCSO spokesperson Mark Myers explained.

"As soon as the district was made aware of a police investigation into the allegations. The district cut all ties with David Griggs."

Mcharen also explained Griggs was never an employee in the district and worked as a substitute for just a few weeks.

Griggs eventually admitted he did send and received photos with the two minors in this case. But Myers explained he also revealed a third victim.

"He has a very distinctive pattern, one that is very mind-boggling as to why someone would do something like this," Myers said.

Griggs is now charged with lewd acts with a child. Griggs did not immediately respond to our attempts to talk with him. He is currently out of jail on a $15,000 bond.