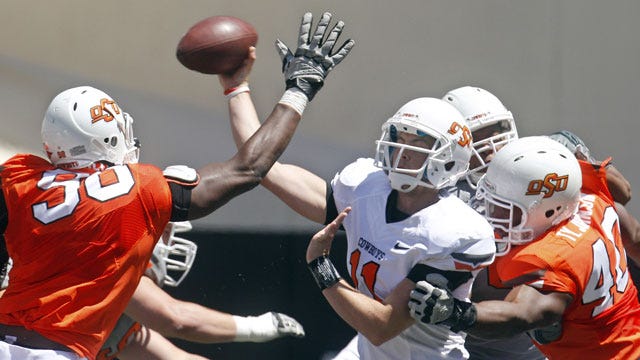 With spring football underway in Stillwater, here are five things to keep an eye on that will directly impact the Cowboys' Big 12 title chances in the fall.

It's not often that a school is faced with replacing both of its coordinators in the offseason but such was the case for Mike Gundy and Co. this winter – kind of.

Former defensive coordinator Bill Young stepped down in the days following OSU's 48-14 destruction of Purdue in the Heart of Dallas Bowl. The defense, which Gundy had dubbed the best since he became the coach, was a pretty big disappointment in 2012. Many fingers were pointed at Young and his resignation wasn't entirely unexpected.

The changes Spencer will make will likely be done within the framework of the existing system, so OSU defenders shouldn't be faced with many adjustments, but do expect a more aggressive approach.

However, a completely new – and relatively unknown – face will be taking the reins on the other side of the ball.

Gundy took a risk in hiring relative unknown Mike Yurcich from Division II Shippensburg University but the numbers his offense put up were gaudy. Yurcich's offense put up 530 yards per game and his quarterback, Zach Zulli, won the DII equivalent of the Heisman Trophy with 4,747 passing yards and 54 touchdowns.

And, as Gundy has previously mentioned, the offense system OSU has used under Dana Holgorsen and Todd Monken will remain in place with Yurcich's wrinkles added in.

Fans should see some of those wrinkles added in the spring as Yurcich, who doubles as the quarterbacks coach, will be looking closely at Clint Chelf, J.W. Walsh and Wes Lunt for his signal caller duties.

Speaking of Chelf, Walsh and Lunt, OSU enters this spring similarly to last year without a clear-cut starter even though coach Gundy said Chelf is the starter at this point.

Chelf has the upper hand, as he will be a senior and he proved to be the most consistent of the three last season. Chelf, again, doesn't have the arm of Lunt or the legs of Walsh but his combination of the two coupled with his breadth of experience in the system lends to a head start in the competition.

Lunt, however, might be the best fit for Yurcich, who from all indications likes to air it out more than Monken did the past two seasons. Lunt has an NFL arm but his consistency was spotty as a true freshman and his health is also a major question mark. He suffered three significant injuries in his inaugural campaign in Stillwater, leading to him missing seven games and most of an eighth when he played part of just one drive in his third start prior to injury.

Lunt also, despite a huge arm and Weeden-esque style, was the only QB to throw more interceptions (7) than touchdowns (6) for the Pokes, compared to Chelf's 15-to-6 and Walsh's 13-to-3 touchdown-to-interception ratios.

Much like last season, Walsh enters the dark horse. He has the most physical limitations as a passer of the three but he is more in the Zac Robinson mold than the Weeden one. His appeal comes from his tendency to make smart plays, the threat he poses as a runner and his toughness. After suffering what was reported to be a season-ending knee injury against Iowa State, he played the remainder of the game and then missed just three games before returning in a spot role for the final four contests.

How this derby plays out will be a huge storyline throughout the spring and will have significant implications on the legitimacy of OSU's 2013 Big 12 title hopes.

Joseph Randle's early departure for the NFL Draft is a pretty big blow – and a relatively surprising one – for the Pokes heading into next season.

Randle was undeniably a star for OSU the past two seasons. Randle rushed for 1,216 yards and a whopping 24 touchdown to go with 266 receiving yards and a pair of scores in OSU's 2011 Fiesta Bowl season. Last season, he took on a huge amount of responsibility as OSU tried to break in new quarterbacks on three occasions. He responded with an All-Big 12 season with 1,417 rushing yards and 14 scores.

He was clearly a big factor in the early talk of OSU being the conference favorite heading into 2013. But with his decision to leave, OSU does have the luxury of plugging in uber-experienced Jeremy Smith.

Smith, who is entering his fifth season, has been a major factor the past two seasons but underwhelmed a bit in 2012 with 371 yards on 5.3 per carry with eight TDs. All three statistical categories were down from 2011 where he totaled 646, 7.1 and nine. He also struggled mightily in the receiving game, which is an important role for backs in OSU's modified air-raid attack.

Perhaps the biggest concern is his durability. He did manage at least one carry in every game last season but he spent most of the season around 70-80 percent healthy and only exceeded eight carries once, when he carried 12 times for 59 yards against Lafayette in September.

His bruising style isn't a natural transition from the Dantrell Savage-Kendall Hunter-Joseph Randle lightning bug stretch the past several seasons but he is a more-than-capable No. 1 option in a pass-first offense.

Reserve Desmond Roland is more in keeping with OSU's style of backs with his speed and make-you-miss ability in the open field. He looked very solid in limited action last season with 301 yards and four touchdowns on 6.5 yards a pop. He has a chance to seriously push Smith in the spring.

Also in the mix will be a pair of true freshman in Lone Star state products Corion Webster and Rennie Childs. Both were consensus three-star prospects built in the Randle mold at 5-foot-11 and 185 pounds each. But since both won't arrive until the fall, the Smith/Roland combo will get the lion's share of the work and opportunities to lock up the job heading into next season.

This will not be an easy task and might actually be impossible. Sharp was elite in every facet of the kicking game on a national scale and was generally regarded as one of the country's top kickers and punters, as well as, being unmatched as a kick-off specialist.

Cowboy fans have been a little spoiled in the kicking game as Sharp took over for Lou Groza winner Dan Bailey at kicker and Ray Guy winner Matt Fodge at punter, maintaining and in some ways improving, on their performances in the kicking game.

Highly-regarded freshman Ben Grogan is expected to land one – or potentially both – jobs once he arrives in the fall but two current Cowboys will have ample opportunity to prove themselves in spring football. Kicker Bobby Stonebreaker and punter Michael Reichenstein will get the majority of the work in March and April, particularly Reichenstein, who is the lone punter on the current roster.

But at kicker also watch out for UCLA transfer Kip Smith. Smith is a former starter for the Bruins who sat out the 2012 season because of NCAA transfer rules. The Broomsfield, Co., native was rated the No. 1 kicker in the country by Rivals coming out of high school in 2010. He converted 2-of-3 field goals and 7-of-8 extra points as a redshirt freshman at UCLA.

The Cowboys must deal with the departure of three of the top four ends from a year ago with Ryan Robinson, Nigel Nicholas and Cooper Bassett all using up the last of their eligibility.

Both end positions are up for grabs and there are plenty of players set to battle it out.

Converted linebacker and former pro baseball player Tyler Johnson is easily the favorite at the Leo position after tying for the team lead with four sacks last season and the favorite to join him on the other side might be incoming junior college transfer Sam Wren.

Wren transferred before the second semester and will participate in the spring. He led the nation with 14.5 sacks last season at Arizona Western C.C. and was rated a four-star prospect by ESPN.

The Pokes also have a group of youngsters who could contend for the jobs or at least provide some of the best depth Oklahoma State has had on the line in years with sophomores Jimmy Bean, Trace Clark, and redshirt freshmen Eric Davis, Victor Irokansi and Emmanuel Ogbah, who were all heavily recruited and have spent a year in OSU's highly-praised strength and conditioning program. Also factoring into the mix will be former Georgia commit and four-star Naim Mustafaa, who graduated early from high school and will be with the Pokes this spring. Mustafaa is one of the top-rated defensive prospects to head to Stillwater in the Gundy era regardless of position.

Despite losing three proven commodities, OSU appears to be stacked from a depth and talent standpoint but production and consistency has yet to be seen. It's safe to say they will all be looked at closely over the next month.