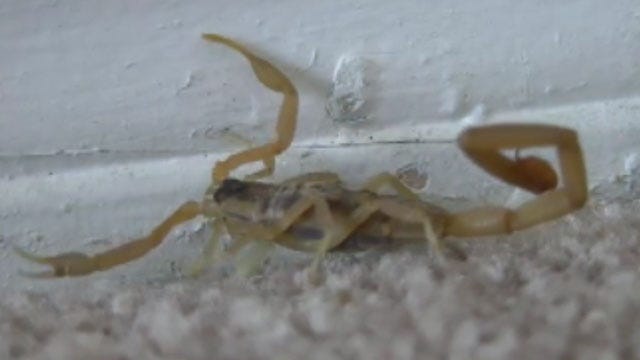 They're creepy, crawly, and downright disgusting, and the drought and mild winter are bringing them out in droves. We are talking about scorpions and spiders. And local pest control companies are already getting calls from customers trying to prevent them from making an appearance.

News 9 teamed up with a local exterminator to take a look at where these creepy critters like to hang out.

"When we are doing an inspection for spiders or scorpions, or getting ready for a treatment, we're looking behind furniture," said Mark Lasater, also known as ‘The Bug Guy'.

Lasater's spent several years looking for, and getting rid of, creepy crawly critters.

One scorpion was found in Norman. And some scorpions can blend right into the carpet, making them hard to see until you see them making a beeline for the baseboards. Lasater says since Oklahoma had a mild winter, residents should expect to see a lot more of them.

"We needed some ice and snow to knock them out. We didn't get it," said Lasater. "We're already taking calls on scorpions, which is a little earlier than we did last year. So they are producing."

And you never really know where they are hiding. Lasater says they thrive on rock piles, wood piles or real thick landscaping. And though they are small, you definitely don't want to come face to face with one.

Some ways to prevent scorpions from coming in is putting weather stripping around your doors and caulking your windows. News 9 is also told that vacuuming out your vents can also help, since both scorpions and spiders like to hang out there too.