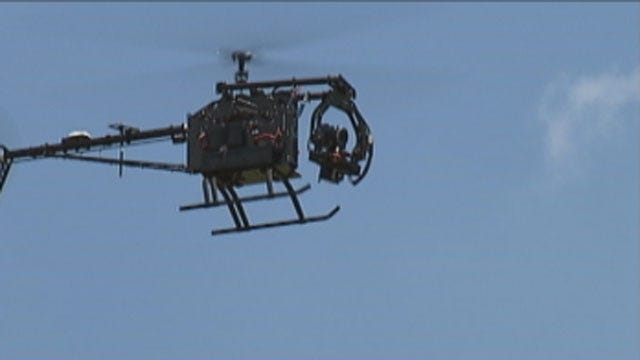 A government report reveals testing in Oklahoma of drones with sensors that can find people and even tell if you are carrying a weapon. It's happening at a remote site near Fort Sill.

The publication Homeland Security Today says the testing is taking place at the Oklahoma Training Center for Unmanned Systems operated by Oklahoma State University. The group doing the work is "a trusted agent" of the federal government.

Located directly across from a cattle pasture in an unassuming house in the middle of Oklahoma, researches are conducting some of the most cutting edge and controversial testing of drone technology.

"It's advanced technology for sure, it's technology that we don't want any of our enemies to have," Toney Stricklin said.

Stricklin does not work for the center, but is a member of the Governor's Unmanned Aircraft System council, and does consulting for the Department of Defense on unmanned aircrafts.

He says the group has a contract with the Department of Homeland security, and is cataloging the drones for law enforcement and first responders.

"We're interested in the capability in the technology to catch the bad guys or respond to fires, tornados," Stricklin said.

But "Homeland Security Today" obtained a copy of the test plan for the program, which also says sensor platforms are being tested that "can distinguish between unarmed and armed personnel." And that's what some say goes too far.

"The general application of helping people in a rescue situation or a lost child is great, but that doesn't mean we should be giving up our privacy rights," attorney David Slane argued.

"Everybody that I know and the folks that I work with, we don't want to do anything that infringes with Oklahomans privacy because that would be infringing on our own privacy," Stricklin said.

Because so much of this drone technology is being developed here in Oklahoma, Slane says a lot of these issues may be determined in Oklahoma courts.

Oklahoma is being considered for one of six FAA test sites for unmanned aircraft. Strickland says if Oklahoma is chosen, it will benefit those with privacy concerns because Oklahoma is such a conservative state.