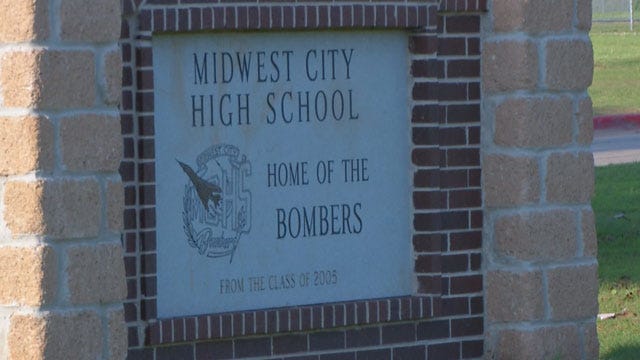 Metro parents are speaking out after their son says a Midwest City high school teacher attacked him twice. On Friday night, those parents say they're not taking the situation lightly.

Ninth Grader Preston Workman admits he created a bit of a ruckus during class, after one of his friends took his wallet out of his back pocket. But his parents say that still doesn't excuse his teacher from losing his temper, hitting their son in the back of the head and above the eye with highlighters.

Some pictures were taken after Preston Workman says his biology teacher threw two highlighters at him during class. The second time he's hit right above the eye, causing swelling above his eye brow.

"So one wasn't good enough, he had to take a second shot at him," said father, James Downs.

"The whole class was hearing him and watched him throw that highlighter and there was no need for that. If you have a problem with the child you go talk to them, you don't go show anger and you don't belittle them in any way," said mother, Connie Downs.

For Preston's parents, James and Connie, this is deeper than breaking skin above their son's eye. It's breaking trust.

"It's hard because we trust the teachers with our kids and now he's hurt, and embarrassed in front of the class, and it's not right," said Connie.

The day after the incident, Preston says he returned to class only to be humiliated in front of his classmates. The teacher, who is also a coach as the school, confronted him about telling the principal.

"Very mad that nothing was done. I don't know what's going to be done, but for him to be out of classes is not right," said Connie.

Since there's only a couple weeks of school left, Preston is just sitting out of the biology class for the rest of the year. News 9 reached out to the Mid-Del School district spokesperson, and are waiting to hear back.