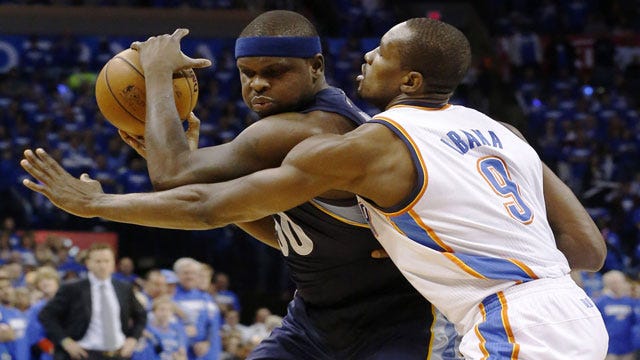 Thunder forward Serge Ibaka was named to the NBA All-Defensive First Team for the 2012-13 season, the NBA announced earlier today.

Ibaka receives All-Defensive First Team honors for a second consecutive season after leading the NBA in blocks (3.03 bpg) during the 2012-13 season.

Led by Ibaka, the Thunder as a team recorded a league-best 7.61 blocks per game. Oklahoma City now has led the league in blocked shots in each of the past two seasons. With Ibaka in the lineup for 80 games, the Thunder held its opponents to the second lowest field goal percentage (.425) in the NBA during the 2012-13 season.

After leading the league in total blocked shots (242) for a third consecutive season, Ibaka joins Dikembe Mutombo (1994-98) as the only other player to accomplish such a feat in NBA history.

The voting panel consisted of the NBA's 30 head coaches, who were asked to select NBA All-Defensive First and Second Teams by position. Coaches were not permitted to vote for players from their own team. Two points were awarded for a First Team vote and one point was awarded for a Second Team vote.