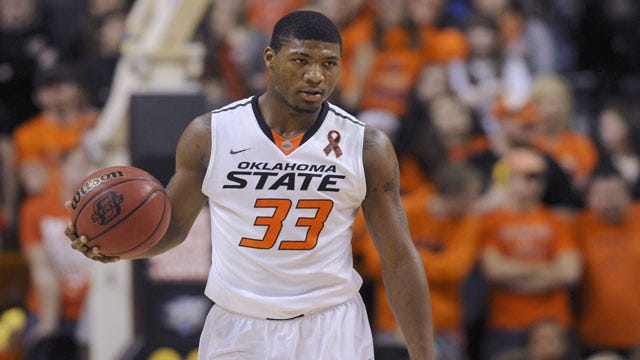 Oklahoma State's Marcus Smart is one of 24 players who have accepted invitations to attend the 2013 USA Basketball Men's U19 World Championship Team training camp, it was announced today by USA Basketball. The training camp will be held June 14-19 at the U.S. Olympic Training Center in Colorado Springs, Colo.

Smart, one of 16 invitees with previous USA Basketball experience, was a starter for the USA U18 squad that won the gold medal at the FIBA Americas Championship last summer in Brazil.

The 2013 USA U19 World Championship Team will be led by a trio of experienced and successful college coaches, including Florida's Billy Donovan as head coach, and Shaka Smart (VCU) and Tony Bennett (Virginia) as assistant coaches. Donovan and Smart were coaches for the 2012 FIBA Americas championship.

"We have a really impressive group of talented players and a large number of the players have USA Basketball and college experience," said Jim Boeheim, chair of the USA Basketball Men's Junior National Team Committee. "Selecting our 12-man U19 team will be extremely difficult, but the committee is excited and confident that we will be able to field another strong USA team."

"The FIBA U19 World Championship might be from top to bottom the most competitive competition FIBA conducts," Boeheim continued. "Any of the teams that are competing have a real chance to win the U19 gold medal as has been shown by six different countries winning the title over the last six U19 World Championships."

The USA 19 training camp will be used to select the 12-member USA team that will compete in the FIBA U19 World Championship. The U19 training camp will begin on June 14 and continue through June 16. Team finalists will be announced following the June 15 morning session, and the team will continue training June 17-22, before departing for the Prague, Czech Republic, for the FIBA U19 World Championships, June 27-July 7.