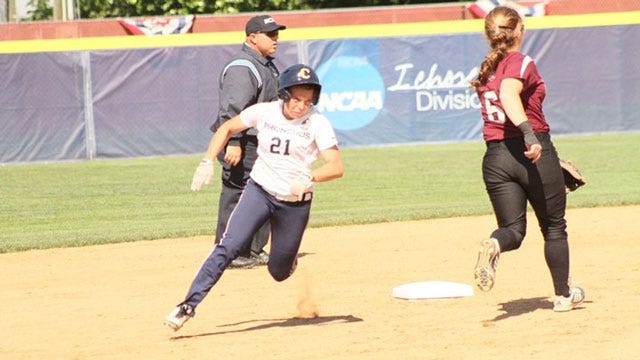 Kacie Edwards has produced plenty of big hits during a sensational four-year career at Central Oklahoma, but none will rival the double she delivered to propel the Bronchos to the NCAA Division II national championship Monday afternoon at the Moyer Sports Complex.

Edwards came through with a clutch two-run double in the top of the ninth inning to break a 2-2 tie, Sam Cool added an insurance run with another double and Kalynn Schrock struck out the side in the bottom of the inning to wrap up UCO's thrilling 5-2 finals victory over Kutztown.

It's the first-ever women's team national title for UCO – and the 18th overall – as the Bronchos capped a perfect 9-0 run through the NCAA post-season and ended the season 51-11. The Golden Bears had a 14-game winning streak stopped in finishing 37-22.

"My whole life I've kept working and grinding and in that situation I was going to do my best to help my team," said Edwards, who had two hits and four RBI in the contest. I wasn't going out there to try and hit a home run, but just to make something happen."

Edwards' 16th double of the season was a long fly to the right-center field gap that went off the glove of two colliding Kutztown outfielders and scored Ally Dziadula and Kaylee Brunson, who had started the ninth inning rally with back-to-back one-out singles.

Cool's two-out bloop double to right field drove in Edwards to make it 5-2 and Schrock finished off her ninth straight complete game of the post-season by fanning Kutztown's 4-5-6 hitters to set off a wild celebration on the field.

"This means a great deal to our university and our athletic department and I'm very honored to be bringing this national championship trophy home to the University of Central Oklahoma," coach Genny Stidham said. "It was like a roller-coaster ride. We were one strike away from taking it (in the seventh) and let them get back in it, but this team does what they do and they get us back on top."

UCO was poised to end the game after taking a 2-1 lead in the top of the seventh on Edwards' bases-loaded single that scored Tori Collet, who had started the inning with a single to right field before Dziadula singled and Brunson walked, but Kutztown answered in its final at bat.

The Golden Bears, limited to one hit in the first six innings, came through with two hits and a walk to push across the tying run. Nicole Henninger's two-out, two-strike double tied it and left runners on second and third before Shrock got a strikeout to end the inning and force extra innings.

The Bronchos got three-hit outings from Dziadula and Brunson, while Edwards, Cool and Collet had two hits apiece. Schrock gave up five hits and one earned run in improving to 34-6, with the junior left-hander striking out 14 in an 133-pitch outing.

Schrock was named the tournament's Most Valuable Player and was joined on the all-tournament team by Edwards, Dziadula, Brunson, Collet and Nicole Workman. Brunson ended the tournament 11-for-15 at the plate, a .733 average.

UCO struck first in the tense battle, pushing across a run in its initial at bat as the Bronchos were the visiting team for the fourth consecutive game.

Dziadula led off the game with a second-pitch double to the left-center field gap and the freshman sparkplug moved to third on third on Brunson's groundout before scoring on a groundout by Edwards.

Schrock retired the first nine batters of the game before the Golden Bears led off the fourth with their first hit, with Jackie Hetzler going to second on an error during the play. She went to third on a sacrifice bunt and scored on a sacrifice fly to make it 1-1.

UCO threatened in the sixth after putting runners on second and third with two outs, but Kutztown right fielder Morgan Booth snared Hayley Hudson's well-hit line drive for the final out.

Schrock then struck out the side in the bottom of the sixth and the Bronchos finally broke the deadlock in the top of the seventh, though Kutztown would answer in their final at bat.