Ricketts Throws Another No-Hitter To Lead Oklahoma Past Michigan 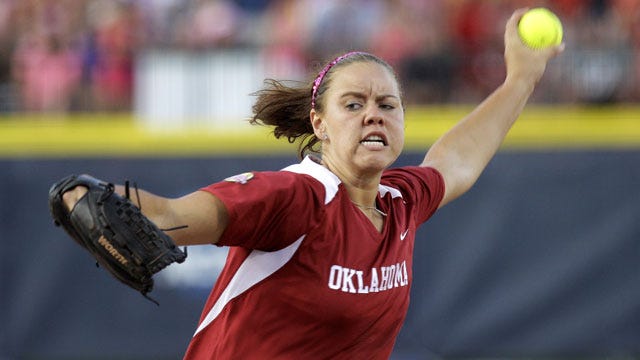 Earlier this week, Oklahoma pitcher Keilani Ricketts was named the USA Softball Player of the Year for the second consecutive season. Thursday night in the Sooners' first game at the Women's College World Series, Ricketts showed exactly why she had earned that accolade once again.

Despite an error in the third inning that led to a Michigan run, Ricketts threw a no-hitter to lead the Sooners to a 7-1 win over the Wolverines, her sixth no-hitter of the season.

With the win, Oklahoma advances to take on arch-rival Texas in the winner's bracket at 8:30 p.m. Friday night.

It wasn't the cleanest no-hitter—Ricketts allowed two walks, hit two batters, and had three batters reach due to a fielder's choice—but a no-hitter is a no-hitter. Ricketts kept the Wolverines off-balance all night, striking out 12 batters with a variety of pitches.

At first, it appeared the Sooners were nervous and sluggish, perhaps from the enormous expectations placed on them as the heavy favorite, or from the added pressure of playing for a state still putting itself back together after the tornadoes from just over a week ago.

Oklahoma struggled to figure out Michigan starting pitcher Sara Driesenga, picking up just a single hit in the first two innings and striking out four times. On defense, errors—one that showed up on the score sheet and two more that did not—ended up costing the Sooners a run that at the time, looked much bigger than it actually was.

Michigan's Sierra Lawrence led off the frame and reached second base when OU third baseman Shelby Pendley fielded a ground ball and threw wide of Lauren Chamberlain at first base. Pendley then allowed Lawrence to reach third on a fielder's choice and then Lawrence came in to score when catcher Jessica Shults dropped Ricketts' toss that would've had Lawrence out by a mile.

Instead of panicking, the Sooners relied on their powerful offense, scoring four runs in the bottom of the frame on five singles to retake the lead and wipe away any momentum Michigan had from its lone run in the top of the frame. Shults delivered the biggest blow, a two-run single with the bases loaded to put OU on top, 4-1.

That was more than enough support for Ricketts as the Sooners moved to 51-0 this season when scoring at least three runs in a game. Ricketts mowed down the Wolverines' lineup the rest of the way, getting six of the final 12 outs by strikeout.

Chamberlain got in on the action in the bottom of the fourth by golfing a pitch around her ankles to dead centerfield and halfway to Frontier City. The home run put OU on top, 6-1, and seemed to deflate Michigan to the point of resignation.

Ricketts' no-hitter was the first at the WCWS since May 31, 2007 when Washington's Danielle Lawrie and Tennessee's Monica Abbott both threw no-hitters.

Despite the early scare, the Sooners showed why they are the odds-on favorite to win the program's first national championship since 2000. Thursday's game showed it won't be a cakewalk, but having Keilani Ricketts in the circle goes a long way toward accomplishing that goal.

Ricketts Throws Another No-Hitter To Lead Oklahoma Past Michigan