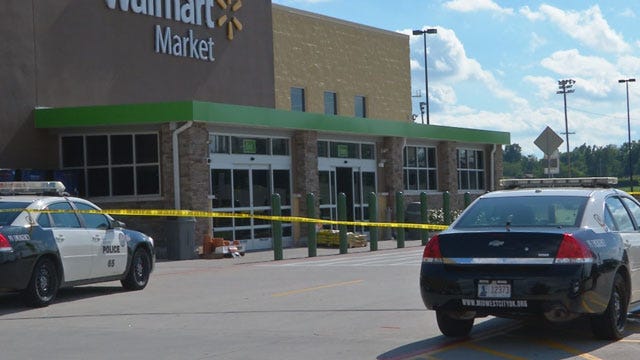 The man who held a 2-year-old hostage at a Midwest City Wal-Mart spent more than two months at the City Rescue Mission in downtown Oklahoma City.

Police shot and killed the Dallas man after he started to countdown the toddler's life at knife point Monday.

Sammie Wallace, 37, was just one of hundreds of others who stayed at the city's rescue mission. Wallace was there from August to October of last year and was in the job placement program.

On any given night there are anywhere between 400 to 450 men, women, and children staying at the mission. Everyone has to go through a lengthy evaluation in order to get help with immediate needs.

"We give individuals kind of an exit strategy whenever they walk in, and based on looking at all the records and everything, he was just like a typical client," said Chad Green, with the City Rescue Mission.

Green, over development at the mission, says there were no indications according to Wallace's records that he was any type of threat. Wallace enrolled in the work placement program, a program Green says is designed for those ready to get back on their feet.

"Most often an individual who falls under that program doesn't necessarily have a substance abuse issue, hasn't been homeless for a long time," said Green.

Monday though, at a Midwest City Wal-Mart less than a mile from where Wallace lived, a much different story unfolded. Police say he walked in, in the middle of the afternoon, took the 2-year-old girl out of a shopping cart, and held her hostage at knife point.

Wallace was shot once by an officer, and was pronounced dead at the hospital.

Green says they try and help their clients as best they can, but aren't always successful with getting them on track.

"We position ourselves to say, here are the services that we are offering, if you want to take advantage of them, you can, but we're not going to force anything upon you, and so it's by your choice," said Green.

Sammie Wallace was also a wanted felon in Dallas, and had already served time in prison.