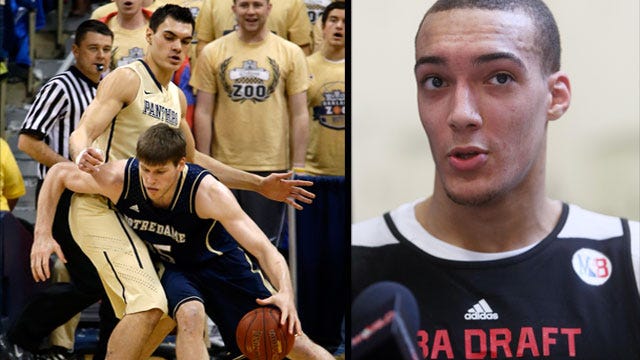 Well, he's huge. Adams is a 7-footer with a 7-foot-5 wingspan that moves very well for his size. He can rebound and block shots and basically just be big. He's extremely raw, but only 19 years old, so there's plenty of time to improve.

Pretty much anything and everything offensively. A native of New Zealand, Adams didn't start playing ball until a late age, and he looks it. He shot 57 percent, which looks good, but he didn't try much outside of layups and dunks. Adams shot just 44 percent from the line and is likely two or three years away from making an offensive impact in the NBA.

Not very much – at least not immediately. Adams is projected to go right around 10-12 in the draft, but OKC needs a guy that can contribute right away, not a project. He'd be a slight upgrade over Hasheem Thabeet because of his mobility and athleticism, but that's about it for now. Down the road – now that's a different story. Adams' ceiling is certainly high.

Comparing this guy to anyone currently in the league is very difficult.  At 7-foot-2 with a 7-foot-9 wingspan, his build is comparable to former NBA player Shawn Bradley.  Gobert adds exactly what you'd imagine he would: length, shot blocking and paint presence.  He moves very well for a guy his size and his motions are surprisingly fluid.

His offensive game mostly consists of dunks and buckets within three feet of the hole, which won't cut it in the NBA unless you're built like Dwight Howard (Gobert isn't.)  He needs to find directions to the weight room and work on increasing his offensive arsenal before he can expect to make an impact in the NBA.

Gobert is a project pick for the team that drafts him.  If OKC so happens to snatch him up, there's a good chance he'll stay overseas and play next year.  The Thunder is in money-saving mode and Gobert needs extra time to mold his game.