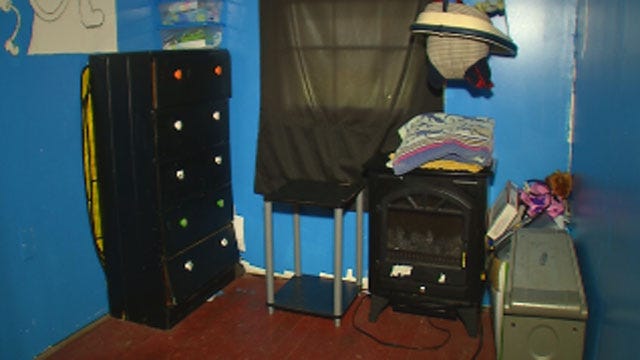 An unusual burglary has a metro mother on edge. Police are investigating after someone ransacked a family's nursery, stealing from an unborn baby.

That mother will give birth to a little baby boy in just a few weeks. That's why she's so upset and trying to figure out what to do next.

She and her family came home this weekend to find just about everything in their nursery was gone.

"I had his bed, I had his carrier, I had his diaper bag. I had everything ready to go to have him," Jennifer Rhoades said.

Before this weekend, Jennifer had everything set up in the baby's room. Diapers were stacked up along the wall.

But now, it's just about empty. She says someone broke into their home near S.W. 26th and Independence on Saturday. They were getting ready to celebrate Cecelia's 4th birthday and had gone to the store. When they came home, they found their front door wide open.

"The A/C was on my bed like they had crawled through my window," Rhoades said.

Along with Cecelia's TV, their new baby's crib, diapers, and other baby shower gifts were stolen.

"It's like they knew that I had the stuff. I don't know if it's somebody that knows me, or somebody that had been watching us," Rhoades said.

Whoever it was, they wouldn't get much money out of trying to resell it. Jennifer had taken most of the furniture and baby toys out of their boxes.

"What can they do with it? They can't take it back. They can't get store value for it," Rhoades says. "We don't have a lot of money as it is."

Jennifer's baby shower was just a week ago. She says she is getting some help from Infant Crisis Services here in the city.

If anyone has any information on the burglary, call Oklahoma City Police.