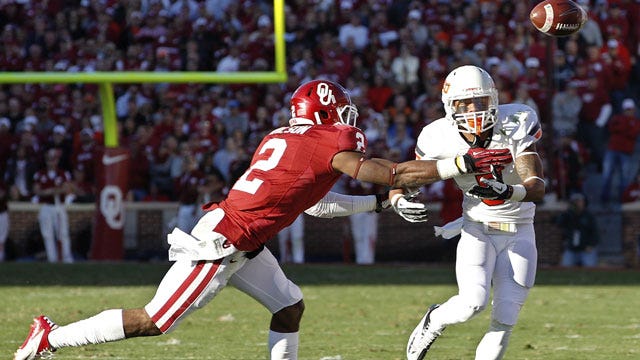 Changes from the NCAA Rules Committee will take effect in the upcoming college football season, and the NCAA is making one thing clear: targeting another player's head or leading with the crown of the helmet is absolutely intolerable.

In 2013, targeting the head or leading with the crown of the helmet will warrant a 15-yard penalty as well as disqualification for the remainder of the game. Getting flagged in the second half will merit disqualification for the remainder of the game and the player will also be disqualified for the first half of the next game. If it happens in the second half of the last game of the season, a player with remaining eligibility will serve the suspension during the first game of the next season.

These types of ejections will be reviewable by immediate instant replay if it's available.

The Rules Committee also adjusted the definition of "Blocking Below the Waist" to make such blocks legal within a zone around the line of scrimmage (seven yards on either side of the ball and five yards back toward the quarterback). Additionally, all players may block below the waist as long as the "force of the initial contact" is from the front, not the side or back, and once the ball has left the zone, players cannot block below the waist toward their own end line.

Also, if a player injury causes the clock to stop with less than a minute remaining in a half, the opponent will have the option of a 10-second runoff. The injured player's team can avoid this by using a timeout.

New language in the "Assisting the Ball Carrier" rule deletes the words "push" and "charge into," thereby allowing those types of plays and clock adjustment may now happen at the end of any quarter rather than just at the end of the half.

Finally, thanks to a trial run by SEC officials, on-field crews may now opt to use protected wireless communication devices.