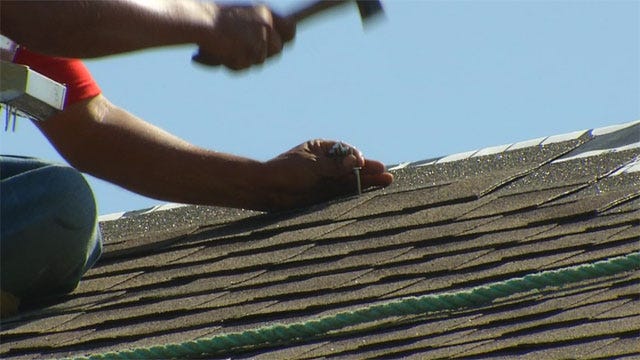 Roger and Maricarol Wilson took three bids to replace the roof of their storm-damaged Edmond rent home. The salesman told them his boss lived right around the corner.

Chad O'Laughlin, the man who was supposed to repair their roof, cashed a $5,000 check – an advance for materials -- and disappeared without nailing a shingle.

"When he (O'Laughlin) finally called, he was in Utah, I believe. … And then he just quit calling, wouldn't answer his phone," Maricarol Wilson recalled. O'Laughlin offered to return their money. They're still waiting a year later.

The Wilsons sued O'Laughlin but were forced to drop the case because their attorney couldn't find him to serve him with the summons. Their only remaining recourse was to file a complaint with the Construction Industries Board.

The 9 Investigates team tried to contact O'Laughlin. He responded to a Facebook message and said he was in Florida, but he provided no explanation about the incident.

The team reviewed the Wilsons' complaint and hundreds of pages of other reported incidents going back to creation of the state roofer registry in late 2010. Under the Roofing Contractor Registration Act, roofers must register with the CIB to be able to work. Lack of registration can result in a $500 fine.

The team found that enforcement is nonexistent, and storm-chasing roofers continue to flout the rules. Cities that require permits for roofers have an additional defense, but most Oklahoma communities don't require roofers to be permitted or prove they're registered with the state.

The team found one prosecution for failing to register.

District attorneys will occasionally prosecute roofers for embezzlement or home-repair fraud, but the CIB lacks the manpower and legal authority to investigate complaints, and district attorneys have more pressing cases to prosecute, particularly when a roofer is out of state and the dispute straddles the line between a civil and criminal matter.

"It's just red tape," Rep. Mark McBride, R-Moore, a roofing company owner who represents much of tornado-ravaged Moore, said of the complaint process. "I don't think it's very effective."

The complaints show what can happen when homeowners hire the wrong roofer.

Although a number of complaints dealt with shoddy roofing and out-of-state roofers, many involved Oklahoma-based roofers who brazenly took homeowners' money and disappeared, leaving full voicemail boxes and returned letters. Other complaints involved roofers that hired unregistered or unscrupulous subcontractors. Under the law, subcontractors can operate under a contractor's roofing registration, but trouble arises when unscrupulous contractors refuse to honor their warranties or don't pay their subcontractors, who then may file liens or sue homeowners.

In some cases, the complaints came from other roofers, noting that one of their competitors wasn't registered. Others came from roofers who said a former employee or competitor was using their name or registration number.

Not all complaints were clear-cut. In each case, the roofer was given the opportunity to respond to the allegations. In a few cases, the roofer responded with a different version of events, claiming that the homeowner was just dissatisfied with the process of roofing and insurance claims. Most roofers, however, didn't respond or couldn't be located.

Midwest City resident Jason Fisher complained in May 2012 that a Texas-based company took $8,000 from him to buy special energy-efficient shingles he wanted but never fixed the roof. He sued, but the company's attorney argued that her client wasn't liable and the company had gone out of business.

The case was dismissed. No one was prosecuted.

"That's a pretty sore spot for me," he said.

In all, Fisher spent about $15,000 on the roof and associated legal fees. He didn't have insurance on the house; now he does.

"It's not effective at all – none of it is," he said of the regulation and prosecution of rogue roofers. "Even with legal representation, you're not going to be able to get anywhere with it."

Sen. Dan Newberry, R-Tulsa, who wrote the 2010 registry law, said he supports strengthening consumer protections, such as requiring bonds, but opposes licensing roofers because of the effect on free enterprise.

"The Roofer Registry Act was not intended to be a licensure, but buyer-beware," he said.

McBride pushed this spring to strengthen rules by requiring roofers to carry a $30,000 bond. The legislation passed the House by one vote in the waning days of session but couldn't get a Senate hearing.