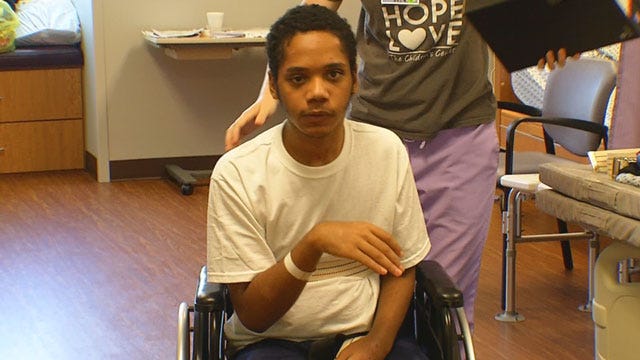 An Edmond teen, once feared brain dead following a "car surfing" incident in March, is now back home. In less than three months, the rehab team at The Children's Center watched the teen make a miraculous recovery.

News 9 has been keeping close tabs on Lauqan Burris's recovery. The Edmond car surfing incident that nearly took his life was an opportunity for a lot of parents to talk to their children about the dangerous activity.

At a place where Laquan spent two and a half months of his recovery, doctors never dreamed at this point he would literally be walking the halls with physical therapist. His mother calls her son's rapid recovery nothing short of a miracle.

"This is just so overwhelming right now. I am so happy. I have been waiting on this day for four months," said Laquan's mother, Mae-Frances Davis. "That nightmare is over."

For Davis and her family, that nightmare began March 22. Her son, and his friend Luke Smith were nearly killed as they were thrown from an SUV going at least 40-miles per hour through an Edmond neighborhood. The two teenagers were car surfing.

"It can change your whole life in a split second coming off that car. He's changed all of our lives, and his has changed," said Davis. "So yeah, talk to your children about car surfing."

Davis says she never lost hope that Laquan would soon be able to return home, despite the severity of his brain injuries. She also applauds her son's rehab team.

"We could tell he was there. He had that light in his eye. I think he'll do even better when he goes home, because he responds much much better to his family," said Pediatric Nurse Practitioner, Tami McMichael.

"I don't care what situation, what the outcome looks like, don't ever give up on your child, because miracles like that happen," said Davis. "We're really blessed that we're putting him in this car today and taking him home."

Laquan will begin outpatient therapy next week, he'll also return to school next month. His friend Luke was released from the hospital in April.