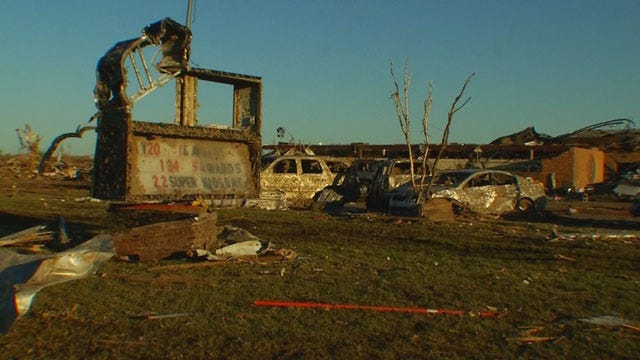 Kids are back in school across our state now, and most of them return to buildings with no storm shelters. That has a lot of families concerned after the devastating tornadoes in Moore.

There's a new push to get shelters in schools, and the plan involves a $500 million bond issue. That funding would go to schools across our state to build storm shelters. That's why an Oklahoma lawmaker is filing a petition to move the plan forward with strong support from parents in Moore.

Not a day goes by that Mikki Davis doesn't think about her 8-year-old son Kyle.

He was one of seven children killed at Plaza Towers Elementary in the devastating May 20 tornado.

"I said goodbye and ‘I love you' that morning. I didn't think it was going to be my last one. You know, I thought I was sending him to a place where he'd be safe," Davis said.

Like most Oklahoma schools, Plaza Towers didn't have storm shelters.

"I think every school in the state should have an equal opportunity to build these shelters to make sure their students, faculty, [and] staff are all protected," Rep. Joe Dorman said.

State Rep. Joe Dorman is proposing bond money be used statewide to pay for the project. Most school districts can't afford it on their own.

But under Oklahoma law, it's unclear whether the government can issue a bond for schools, so Dorman is filing a petition for a Constitutional amendment. With enough signatures, it'll go to a vote. That's the mission of parents like Mikki Davis.

"These seven paid the sacrifice, and no other kid should have to pay a sacrifice," Davis said.

The constitutional amendment would allow the Office of Emergency Management to distribute the money to schools. Dorman says the petition will be filed within the next two weeks, and they'll have 90 days to collect enough signatures. They need nearly 160,000.

If the petition is successful, Gov. Fallin will assign the election day.