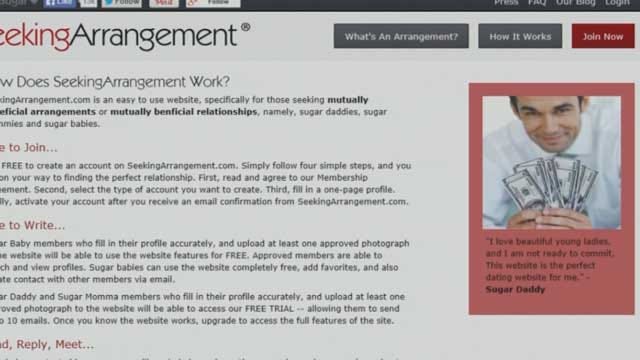 A dating website is becoming an alternative source for college funding. The search for a "sugar daddy" is turning into real tuition dollars for students across the state.

It's an online dating empire based on the concept that it's perfectly OK for mostly rich men to pay for dates and relationships. But, what if you're a college student trying to avoid the pinch of paying for school tuition?

SeekingArrangement.com is rolling out ads and promotions marketed towards college students. According to the website, college students make up 42-percent of what it calls, its "sugar baby" membership.

"They're looking for alternative sources, and we happen to be one of those sources," said website spokesperson, Jennifer Gwynn.

Eighty-four OU students joined the sugar daddy website in 2013 to help soak up the cost of a college education. A total of 150 are registered and actively seeking financial aid from wealthy benefactors.

"We've kind of been slowly targeting them more and more to let them know about this ‘alternative financial aid' if you will," said Gwynn.

"The first thing I thought was, this is online sex trade," said women's advocate, Kristin Davis, and Pres. of WOVEN.

Davis says this is a form of prostitution.

"They are sleeping with the men, and they get the money in return. They don't look at it anything more than a monetary transaction," said Davis.

Website creators admit, eventually sex probably will be involved. However, it's not a requirement. That would be illegal.

"They try to make it seem like it's just companionship, but you know they want more in return," said OU freshman, Bridget Polei.

"Yeah, definitely for that much money," said Polei.

"I mean, I guess if times get desperate and you don't want to take out student loans," said OU Senior, Jayme Crabaugh. "But personally, I wouldn't do it."