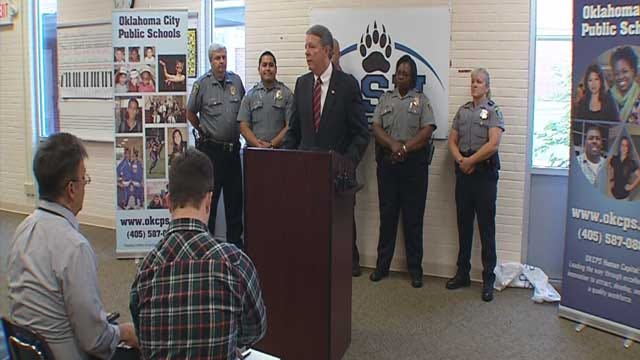 The plan calls for eight School Resource Officers (SROs) from the Oklahoma City Police Department to patrol the elementary schools.

At Greyston Upper Elementary School, everything from locked doors to surveillance cameras serve as layers of security, but now across the district at the elementary level, officials are looking at adding another level of security.

The school year is winding down at Greystone Upper Elementary School, and when the students return next year, the hallways won't just be full of kids. Student will begin to see a uniformed Oklahoma City Police Officer patrolling from time-to-time as added security.

It's part of a $600,000 initiative split between the Oklahoma City police and public schools to pay for eight additional SROs who will serve Oklahoma City's 55 elementary schools.

"There will be some schools based upon location and need and feedback that will have a little bit more presence," Ron McKinley, who oversees the district's security, said.

Oklahoma City police already patrol the middle and high schools in the district, but McKinley said principals have asked for SROs at the elementary school level. He also points to violence in other parts of the country.

"We don't want to wait until something catastrophic happens," said McKinley. "We want to get out in front of it to make sure that we're leaning forward, to make sure our elementary schools and all of our schools are safe as possible."

The Oklahoma City Board of Education will take action on the additional School Resource Officers' contract at their July 1 meeting.

The Oklahoma City Police Department also plans to assign K-9 units to serve the schools at no additional cost.