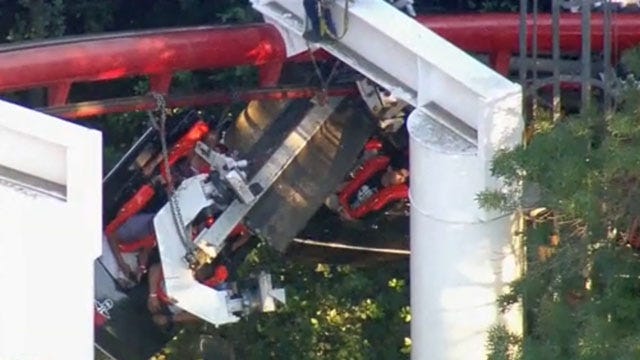 Nearly two dozen visitors at Six Flags Magic Mountain in Valencia, Calif., are back on the ground Tuesday morning after being stuck in the air for nearly three hours, CBS News correspondent Carter Evans reports.

According to witnesses, a tree fell onto the tracks. The roller coaster then smacked head on into the debris.

"We were going across one turn and all of a sudden a loud noise happened, and I ducked down just at the time a hard branch hit me in the head," said injured rider Jeremy Ead.

Six people were hurt, two were taken to a hospital as a precaution, but all are expected to be okay.

"I was really shocked at first," said Six Flags employee Kimana Marquez. "I had no idea that could even happen."

Rescue crews had difficulty reaching some of the stranded passengers. Working around high branches and the coaster's twisted track, they were able to remove all 22 people from the ride.

"It's in the side of a hill, a lot of shrubbing, and you don't have a lot of good footing so that's the main challenge," said Rick Flores of the L.A. County Fire Department.

Whipping riders around through trees at four times the force of gravity, each car on the "Ninja" swings out 90 degrees to the side, at speeds of up to at 55 mph.

Six Flags Magic Mountain told CBS News: "The safety of our guests and employees is our number one priority, and the ride will remain closed until a thorough inspection is complete."