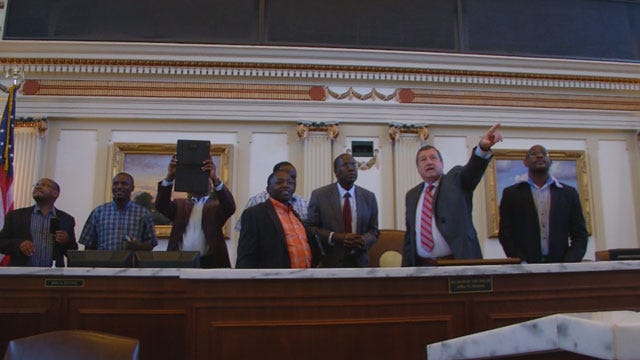 More than 8,600 miles traveled on a 16-hour flight, Governors from Kenya are now in Oklahoma City.

They are here to learn about our government and agriculture. The group has toured farms and stockyards as well as the capitol.

The devolved Kenyan government has only been active for about a year. Kenyans governors continue to look for improvements, with a little help from Oklahomans.

"In a sense it is very similar. We might call it different names and be at different stages, but it's pretty much the same," said H.E. Ahmed Abdullahi, Wajir Governor

For the governor of Wajir, seeing the Oklahoma landscape and landmarks is certainly new and education. The tour around the house chamber was led by State Rep. Mark McBride who answered questions that even included, ‘What is the pledge of allegiance?’

"It's been a rewarding experience to sit and visit with them," said McBride, (R) District 53.

But sightseeing is one of the last things on the agenda during this study tour.

"It's like a child and have to help it grow and they're concerned how to overcome some of the corruption in their government," said McBride.

That corruption has scarred Kenya's government for decades. Now in a transition away from a centralized government, these Kenyan governors hope to develop the relationship between their regional and national governments like the state and federal governments in the US.

"We have come here to see how people play their roles without conflict. And if there are conflicts, how are they resolved," said Wycliffe Ambetsa Oparanya, Kakamega Governor

Stockyards and irrigation efficiency are the other key objectives. The irrigation lesson was conducted by non-profit organization Water4. The governors hope what they learn in our home can be duplicated back in their home.

The group will return to Kenya on Thursday. And as for why they chose Oklahoma, it was thanks to a previous relationship with several universities here in the area.